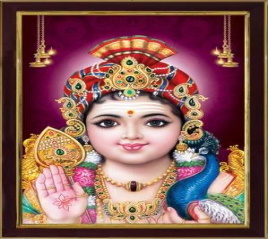 Some of the miscreants, who want to destroy our holy Hindu Religion, and to cause damage to our holy Sanatana Dharma, are finding fault with the Tamil Text, Kanda Shasti Kavacham, which is specially             written by Sri Devaraya Swamigal, in order to protect our each and every body parts. Some of those bad minded people are also badly commenting about our beloved god Muruga, as a family man, containing two wives, and they are doing like this, without knowing about the significance of Muruga and about his Shakti elements, Ma Valli and Ma Deivanai.

Can we see at least any one Hindu holding a copy of Muruga Puranam during their travel to the Murugan temples? No. it is highly impossible, though some of us would carry some Mantra books of the deities during the time of our travel to the temples.

But we can see lot of Christians who affectionately hold their holy bible like their child, during their travel to the Churches!

This type of things happens, mainly due to our lack of faith on our precious Hindu deities like Lord Muruga. When someone says, that Lord Muruga is merely a fictitious character, and laughs, sometimes, we are also joining with them in their laugh, thus, by proving before them, that Muruga is really a fictitious god!

We can quote a very good example about the existence of Lord Muruga, not from the Puranas or from the Avvaiyar’s texts! When Lord Krishna has explained about the Bhagavat Gita Teachings, he says, “Oh my dear Arjuna! Among the gods, I am the six headed god, Muruga”. There is a lot of proof about the delivery of the great divine lecture Bhagavat Gita, by Lord Krishna, and it was inscribed in the walls of some of the ancient Krishna temples in Mathura. If Christians strongly believe about the formation of their beloved god, Jesus Christ, then why we are having doubt about the formation of Lord Muruga! All these types of worst things happens due to the evil influence of Lord Kali Purusha, and we also cannot blame him for that, since he is also subject to do his duty, as per the instructions given by the creator god, Lord Brahma to him.

Ma Avvaiyar in one of her nice Tamil Divine works tells like this, “Hey my beloved people accept Muruga as your true god. Since at this present Kali Yuga, he is the true saviour, who protects us from the evil minded Kali Purusha, and he acts like an affectionate mother to small children, and to the elderly people, he acts like the affectionate child”.

Hence let us pass on to others about the significance of Muruga, and let us accept Lord Muruga as our true god, without having any second thought on our mind.