In: Katha
With: 0 Comments 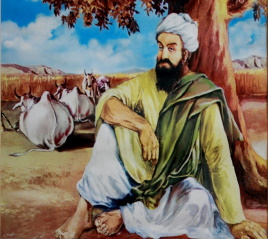 Dhanna Bhagat was born in the year 1415 and he was a great poet and a Krishna devotee who will used to compose beautiful songs and sing in praise of Lord Krishna.

He was born in the village in the Tonk district of Rajasthan in a hindu family.

He was the founder of the Krishna Swami Samaj in the state of rajasthan and spread the bhakti spirit on Lord Krishna throughout the region. Through his great bhakti, he got spiritual powers. It is believed that once he got the divine darshan of Lord Krishna and Mata Rukmani and was blessed by them.

There are lot of interesting stories about the divine powers of Dhanna Bhagat. Once he served food to hundreds of saints using only a small quantity of rice. Through his great powers, the food grains started increasing enough to feed the 100 saints. He also converted the vegetables into precious stones and distributed it to the poor people. He cured the leprosy of a person, and changed him into a healthier person. Though he contains great power, he didn’t get pride, and used his powers only for doing useful service to the people.

He also helped in renovating and repairing the ancient hindu temples, and made proper arrangements for conducting regular puja activities. Throughout his life, he provided a dedicated service to the people and to the divine god.

In 1974, a Punjabi movie was produced in honour of him. The film was named as “Bhagat Dhanna Jatt”, and Sri Dara Singh Ji, was acted in the lead role.

He was a kind and a noble man, who lived a simple life and was a cowherd by occupation. He will used to give his cow’s milk to the temples for doing abhiskhekham to the deities. He also removed the diseases and sufferings of the people through his spiritual power. He was praised by the common people and by the kings for his great powers.