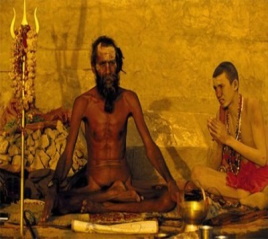 Pavhari Baba was a great Hindu Saint who was born near Varanasi in a Brahmin family. He was born in a village at Jaunpur District in a Brahmin family. In his young age, he studied in ghazipur under his uncle’s guidance. After completing his education, he went on a pilgrimage to many holy places and performed yoga and meditation. He is a great devotee of Lord Shiva and Lord Vishnu. He would frequently chant the “RAM NAAM” and insists his followers to do it, and also he had explained the greatness of chanting the ram mantra, and the benefits that can be achieved by reciting the mantra continuously.

After finishing his holy journey, he returned to ghazipur and built an ashram for him, and done meditation and Yoga for several years. He was a very kind hearted man. According to one incident, once a thief had entered into his ashram and tried to take some valuables which were kept inside his house. On seeing this, the great baba, approached him and he himself gave all the things in his house and asked him to go safely to his place. He was such a pious and a humble person, which cannot be seen in this today’s world. Due to his kindness, the thief had become a sincere follower of Pavhari Baba.

In the year 1890, Swami Vivekananda visited him at ghazipur. He praised Baba for his simplicity, kindness and for his great meditative powers. And he further says that he has met a divine soul and discussed with him about spiritual matters.  Vivekananda once delivered a lecture about the holiness of baba, which was later published in the form of a book.

He was a strict bachelor and observed it throughout in his life. During his life time, he will used to have only a small quantity of food, and sometimes would take only one meal in a day. Even for some days, he didn’t consume any food, but consumed only the air as his food.

He was a master in teaching Hindu philosophy to others and spread the importance of Hinduism across the region. He also became a disciple of a saint and learnt the essence of hindu scriptures.

Pavhari Baba was considered that god is the main master and we are all his slaves. He will used to frequently tell to his followers as “LISTEN HOLY PEOPLE. HAVE BHAKTI ON GOD, AND GOD IS THE ONLY PROTECTOR IN THIS WORLD. HAVE FAITH AND WORSHIP HIM WITH FULL OF DEDICATION AND DEVOTION IN MIND, AFTER ALL WE ARE ALL THE SERVANTS AND SLAVES OF THE GOD. AND WE HAVE BEEN BORN IN THIS WORLD TO PROVIDE SERVICE TO HIM”

He was very much interested in feeding food to the poor and to the hungry animals and birds. He will used to treat even his enemies as messengers of god, and believed that by way of getting troubles from them they are reducing his past birth sins.

He got the great power to transform a wicked soul into a good soul.

It is believed that at the age of 100, he had committed suicide by burning himself in fire. He died during the year 1898. It is considered that he had attained SALVATION after his death.

Though now he is not alive, his teachings and his kindness and holiness can never be forgotten by the people who study his life history. Throughout his life, he never cause any harm to others, and lived a saintly life. He was not interested in enjoying worldly comforts and luxuries but concentrated his attention only on doing meditation, chanting the names of the gods and goddesses and praying for the well-being of the entire UNIVERSE. It is also believed that through his spiritual powers, he had cured the mental and physical diseases of his devotees and invoked them into the spiritual path.