In: Divine Matters, Katha
With: 0 Comments 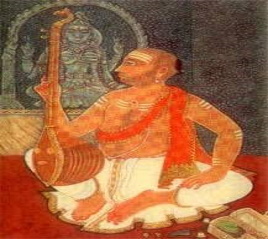 Shyama Sastri (1762–1827) was a great musician and a divine composer of Carnatic music. He was senior to the two divine composers Tyagaraja and Muthuswami Dikshitar.

Shyama Shastri was born in a Brahmin family in Tiruvarur.  He learnt the vedas, Upanishads and divine scriptures at his younger age. He learnt music under a famous musician of Thanjavur.

His compositions are well known due to his great proficiency on the music. He got the blessings of goddess saraswati, and he became a very clever and a knowledgeable person. He was a great devotee of Mata Kamakshi Amman and worshipped her with great devotion and regularly visits her temple, and performed various pujas to her.

He composed kirthanas in Telugu as well as in Tamil. Most of his compositions tell about the greatness of goddess Kamakshi. He got a very good voice and sings melodiously during his period.

Shyama Shastri died in Thanjavur in 1827 and attained the Lotus feet of the divine mother “KAMAKSHI”. One of his two sons Subbaraya was well versed in singing songs on “KAMAKSHI” and also a great composer of divine songs. He was trained by Tyagaraja, who is also a divine composer of Carnatic music.

Shyama Shastri had many disciples, and most of his disciples were trained under his supervision and they become celebrated musicians.

Shyama Sastri, though he was a family man, he lived a saintly life, and dedicated his  entire life towards writing songs on KAMAKSHI AMMAN and singing in front of her temple and also in several musical concerts. He was also a worshipper of Tumburu and Narada, since both of them were good musicians. His entire thoughts were involved in music and thinking about the greatness and kindness of KAMAKSHI. Let us worship the divine musician and be blessed.