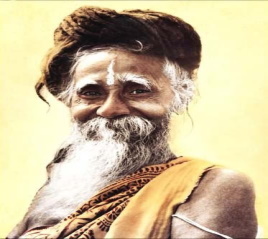 Sitaramdas Omkarnath (1892–1982) was an Indian saint from Bengal. He invoked the bhakti path among his devotees throughout the world, and also preaches the importance of chanting Ram Nam. He is considered as a pious and a holy man among his followers and his devotees. Sitaramdas Omkarnath had written many books related to Hindu scriptures, and constructed temples and ashrams throughout india, and also founded a spiritual organisation and through that, he had cultivated the bhakti spirit among the people. He contains great knowledge, wisdom, courage and braveness and was a good scholar in vedas and hindu religious texts.

Sitaramdas Omkarnath was born in a village in the district of Hooghly, West Bengal, in the year 1892. His original name was Probodh Chandra Chattopadhyay and was born in a Brahmin family and after finishing his education, he started his own practice as an ayurvedic physician in his native village. His family deity is Lord Krishna. He was a sincere devotee of Lord Ram, and will used to have his daily food, after chanting ram naam japam for atleast 1000 times in a day.

Omkarnath had his basic education in a village school but after some time he left that school and he studied under Sri Guru Yogeswar. Once in his younger age, he got the divine darshan of Lord Shiva and Mata Parvati. He was also a worshipper of Mata Kali, and got spiritual powers through her grace.

His Guru had given him the popular name, Omkarnath and after some time, he came to be known as Sitaramdas Omkarnath. He will used to do meditation in a cave at Ramashram, Dumurdaha, Hooghly, by chanting the gods and goddess names.

His thoughts were full of reciting Ram Nam and he practiced the habit among his fellow villagers. He also renovated and repaired the temples and provided shelters for the poor, given proper food to the poor, given education to the poor children, distributed clothes the poor villagers, and also helped the marriage of their daughters. Lakhs of devotees were become the followers of Sitaram, due to his kindness and for his selfless service to the mankind. Sitaram was respected by the great spiritual gurus like Anandamayi Ma, Dalai Lama, Swami Chidananda and others.

Omkarnath died in the 1982. And for some time, his body was kept at Sri Ramashram, Dumurdaha for public homage.

He has also done lot of miracles in the life of his devotees. He had made the bed ridden people to cheerfully walk in the streets and interact with others, cured the cancer, leprosy and mental disorder patients, and given them a new life, and made them to stand them on their own legs, without expecting anybody’s help.

He also concentrated in doing help to the poor female villagers. He made them to actively get engaged in doing small chores of activity at his ashram, and provided wholesome food to them along with their children. He also showed much kindness to the animals and birds, and regularly fed them with milk, biscuits and food grains.