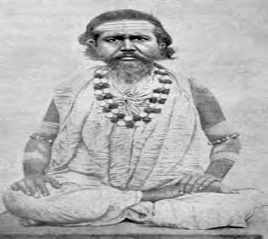 Krishnananda Agamavagisha also called as Krishnananda Moitra was a Brahmin of Nadia, West Bengal and he was a great scholar and good in doing tantric acts, yoga and meditation. He lived during the 16th century AD. He is the author of the “Tantrasara”, and also written several texts on Hinduism, yoga, bhakti and meditation.

Krishnananda Agamavagisha was born in 1650 at west Bengal into a pious Brahmin family, and his father’s name was Acharya Mahesha. He had one brother and four sons. All the entire family members were worshippers of Lord Krishna. He will used to do puja regularly at his home, and perform abhishekhams to the god and the goddess and used to worship Kali Mata temple at his native place. He introduced the Kali Puja worship in his village, and still now the puja is performed in the kali temple of west Bengal as per his guidelines. He was also the guru of the great Kali devotee Sri Ramprasad Sen.

After doing divine service for several years in the earth, he left his body at Mallarpur, Birbhum, and reached the divine world.

He had dedicated his entire life towards doing good things to the people, worshipping the god, doing pujas and removing the sufferings of the people through his spiritual powers. He had got name and fame within a short period of time. But he lived a simple life, and given the money received as donations, to the welfare of the people. He didn’t keep anything for his own purpose. Lot of devotees were benefitted by worshipping him. He was praised by the people and by his devotees. It is believed that once he had got the holy darshan of “KALI MA”, and got her divine blessings and received great spiritual power.