In: Bhakti, Devotees, Puranas
With: 0 Comments 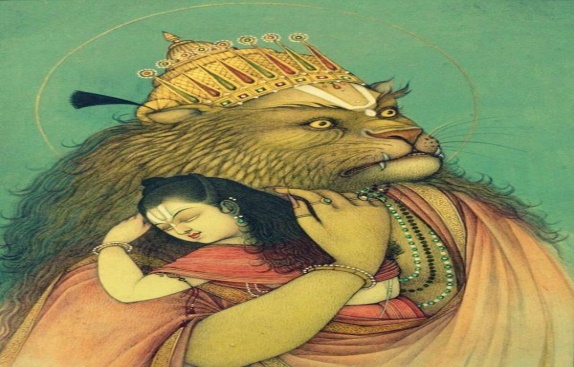 INTRODUCTION
The relationship between a bhakta and the bhagavan is that of a mother and a child. In this picture itself, we can see that Lord Narasimha is gently holding Bhakt prahalad in his hands. God expects only a true devotion from his devotees, and he didn’t expect any rich contribution from them. Bhagavan Krishna tells, “I will be satisfied, even if a true devotee offers me a tulsi leaf, and I would immensely grant boons and fulfil his wishes”.
We can take the example of great devotees like Bhakt Prahalad, Narad, Dhruva and Markandeya. All these devotees were entirely surrendered at the feet of the god, and didn’t expect anything from him and they had expected only their entire dedication on god permanently. Such kind of selfless devotion only is appreciable by the god. Generally god knows when to fulfil the favours of his sincere devotees, even if they didn’t tell their expectations. Generally, he would take away the wealth from them, and make them to show their entire attention on him, in order to give them SALVATION after their death.
We can see from Puranas and other ancient texts that most of the devotees would suffer a lot till they reach the divine world. Why do they? They are getting tested and tested again and again by the god, in order to make them to shine brighter, similar to making of a beautiful sculpture from the stone. In case of the nayanmar saints, most of the nayanmars were very much tested by Lord Shiva, and finally they reached the Kailasa, and still enjoying the eternal bliss in the divine world. Similar to that, we also have to keep our entire attention on god, and whatever difficulty we face, we must never worry about it, and should completely surrender on to his lotus feet.
Let us worship the almighty and be blessed.
“OM SRI VINAYAKAYA NAMAHA”
WRITTEN BY
R.HARISHANKAR