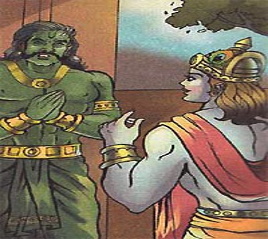 Banasura was a thousand-armed Asura king, and the son of Bali, and the great grand-son of Bhakt Prahalad. Banasura is believed to have ruled the present-day Assam. Banasura, a great demon king, once ruled over a large kingdom. He was a brave and a courageous ruler who never got afraid of any one. Even the devas and the asuras were given proper respect and honoured him. Banasura was a great shiva devotee. He used to worship a Rasalingam which was given to him by Vishvakarma. He used his thousand arms to play the Mridanga when Shiva was performing the dance. Due to the boon given by Lord Shiva, Shiva protects his entire kingdom. Due to that, he got pride and considered himself as the powerful person.

Banasura’s story has been mentioned in Mahabharata and Bhagavata Purana.

He was a great shiva devotee, and after his death, he attained the abode of Lord Shiva, Kailasa and become one of his attendants. He is praised for his wisdom, courage, braveness and knowledge.

Let us worship the great shiva devotee and the great grand-son of Bhakt Prahalad and be blessed.