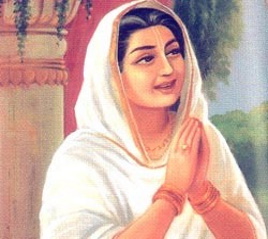 Several centuries ago, there lived a pious and a noble lady in a village in Maharashtra. She was a sincere devotee of Lord Vital of Pandarpur. She lived her life, by cooking food at her home, and selling it to the local villagers. Once she was very much interested to visit the Lord at his temple, and she reached Pandarpur by walk, and she has to cross the holy river Chandrabhaga in order reach the Vital Rukmani Temple, and worship Lord Vital.

Since that time, she didn’t have money, so she has asked the boat man to freely drop her at the Temple, but he refused doing so, and demanded money. Finally she was frustrated and was praying to the Lord at the banks of the river, to take her to his temple and to get to have his divine darshan.

Suddenly, the boatman who was previously refused to take her for a free ride had accepted to take her to the temple without fee. The lady got delighted and joyful tears were fell down from her eyes, and went along with him and reached the temple.

After worshipping the Lord at the temple, she met the boatman again and thanked him for taking her in his boat for a free ride. The boat man was shocked and told to her, that he didn’t take her in his boat at all. Then the lady realized that the boat man who took her through the boat to the temple, was none other than her beloved Lord Vital and thanked him, and permanently stayed nearby the temple by singing songs on the lord, and ate the food given by the devotees of Lord Vital, and built a small hut for her nearby the temple, with the money given by the vital devotees and after her death, she has attained SALVATION through the grace of Lord Vital.

Lot of people were got admired by her beautiful songs on Lord Vital, and they forget their worries and eagerly listened to her songs on the Lord. She also prayed to the god, for the well-being of the devotees, and for those who approached her with their problems. She lived a simple and saintly life, and had thought only about Lord Vital, and chanted his names and glories, and doesn’t enjoyed any other worldly pleasures, which is unimaginable in this today’s world.