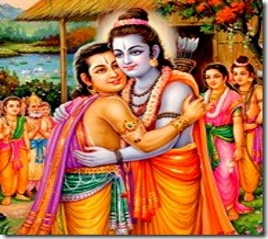 Bharata is the brother of Lord Rama as per the great epic Ramayana. Bharata was a great person who followed the path of dharma throughout in his life.

According to the epics, Bharata is considered to be the incarnation of Shanka,   a divine emblem of Lord Vishnu.

Bharata was born to the king of Ayodhya, Dasharatha and his second wife, Queen Kaikeyi. He was married to Mandavi, and had two sons – Taksha and Pushkala.

During the period of Rama’s exile, he served as the king of Ayodhya. After knowing the reason, that through the act of his mother Kaikeyi, his brother Lord Ram was exiled, he was very sad and got angry with his mother. He also tried to bring Rama back to Ayodhya. Instead of sitting on the throne, he brought the holy foot wear of Lord Ram and placed them on the throne, and then ruled the kingdom of Ayodhya for the period of 14 years, through the blessings of rama. And after rama’s return to ayodhya, and Rama becoming the king of ayodhya, he was given the offer of crown prince. He served Lord Rama throughout his 11,000 years of GOLDEN rule of Ayodhya.  After the completion of Rama’s rule, he merged with Lord Vishnu along with his brothers.

During his rule, everybody was happy and he provided all the facilities to the people of ayodhya and took care of them properly. Nobody was suffered from any health related or mental related problems, and everyone lived a long life. He has not received any complaints from his people. People were treated his rule as a “GOLDEN RULE”, and admired him with much happiness.

Let us worship this great avatar and be blessed.