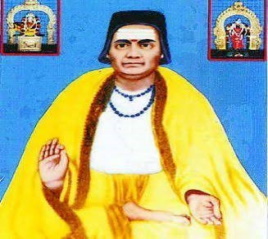 Bhaskararaya (1690–1785) is a great devotee of mother Adhi Parasakthi. He was born in Andhra Pradesh, was patronised by the kings of South India, due to his great efficiency in all subjects and he settled down in Tamil Nadu.  According to several indian and foreign scholars, Bhaskararaya was a great saint and also a great writer and an independent thinker.

Bhaskararaya had written vedic texts, poems on gods and goddesses and sanskrit documents. His major works are focussed mainly on composing poems in praise of Mata Parvati Devi. He died at the ripe age of 95, and it is believed that, after his death, he has attained SALVATION.

Throughout his life, he wrote poems, gave lectures on vedas and Upanishads, and also served as a poet in the king’s court. He was an expert in all kinds of arts, and he was able to speak, read and write in many different languages. Apart from his regular activities, he also helped the poor and the down trodden people, and at his own cost, given sufficient necessities to them.

He was also good at meditation and yoga, and also taught it to his followers and devotees. Through meditation, he attained great spiritual powers, and used the powers for curing the sickness of the people, and removed the problems of the common people and his devotees. He also insisted the people to worship the god with sincere devotion in their mind, and to visit the temples regularly.