Nalanda was an ancient seat of learning from the 5th century AD to 1197 AD founded by the Gupta rulers. It was the first residential international university in the world. The ancient site is located about 88 kms to Patna. It was also the birth place and Nirvana of Sariputra one of the Chief disciples of the Buddha. The word ‘Nalanda’ has been derived from Na-Alam-Da meaning ‘insatiable in giving’. It is one of the major pilgrimage centres of the Buddhists as the land had been blessed by the presence of the Buddha who also delivered many sermons there. The great monastic university became the crown jewel of the development of Buddhism in India. It attracted a number of Buddhist students from all over the world. The main courses taught here were the Buddhist scriptures along with Vedas, Shabda Vidya(grammar), Chikitsa Vidya(medicine) etc. The University received patronage from Emperor Harshavardhan of Kannauj and the Pala rulers. The nearest habitation now is the village of Bargaon near the sites of Nalanda.

Many famous events with the Buddha have been associated with this place. It is said that Buddha met Maha Kassapa who later on became one of his close disciples a few kms from Nalanda. A short distance from Nalanda is the village of Kul which is the Kolita of the past and the birthplace of Moggallana one of the Chief disciples of the Buddha. The famous Chinese pilgrims Fa Hien and Hsuan Tsang were among the distinguished students of the Nalanda University. Their travelogues give detailed descriptions of the place and the events prevailing at that time. Excavation of the place has revealed many monasteries, stupas, staircases, hostels, meditation halls, lecture halls etc built in the old Kushan architectural styles which depict the splendour and grandeur of the place in the past. Hsuan Tsang mentions many Stupas constructed to commemorate different events that took place with the Buddha. Pali Buddhist literature has ample references of Nalanda. It was apparently a great place of pilgrimage, a prosperous temple city and the site of a celebrated University. King Ashoka is said to have given offerings to the Chaitya of Sariputra at Nalanda and built a temple there. It also mentions Nagarjuna the famous Mahayana philosopher who studied at Nalanda and became the Abbott there. King Harshavardhan gifted a 25m high copper statue of Buddha. Dharmapala the Buddhist scholar taught at Nalanda. 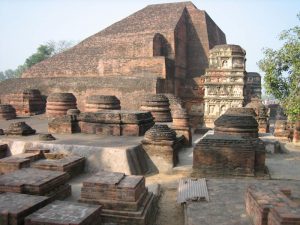 Now ruins of its rich past can be seen everywhere. A large number of sculptures found from Nalanda have images of Buddha and Bodhisattvas. The site is protected by the Archaeological Survey of India and great care is taken to maintain the authenticity of form and design of the original form.

It was the seat of learning of Ancient India and Buddha is said to have visited the place and given sermons near the Mango grove of Pavarika. Later practice and teaching of the Dhamma took place in the centre.  The destruction of the Nalanda University by the Islamic invasion in the 12th century BC could be associated with the decline of Buddhism in India. Now at present the entire Nalanda site has been divided into a number of sites that include 11 monasteries and several temples built in red bricks.

It was set up as a modern centre for Theravadi Buddhist studies and is a pioneer in carrying out satellite imaging of the entire region. One of its main tasks is of teaching Pali language which was widely used in Ancient times. 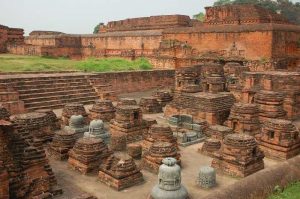 Hsuan Tsang was the famous Chinese traveller who came to India and stayed for 12 years in Nalanda as a student and later a teacher. His records provide information on a number of social and political conditions and events of those times. To honour his memory the memorial hall was built.

It has been established to store ancient manuscripts and Buddhist statues. It also displays unique artifacts and murals, plaques, terracottas, coins, pottery and inscriptions of the ancient period of the Gupta and Maurya dynasty.

Air- The nearest airport is in Patna, 93kms from Nalanda. 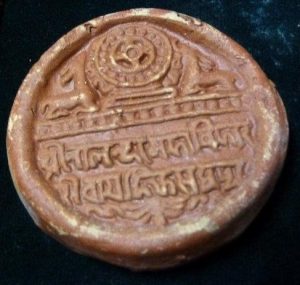 Tourists prefer to stay in Rajgir which is 15 kms from Nalanda in the three tourist bungalows of Ajatshatru Vihar, Tathaghat Vihar and Gautam Vihar.

Excavations in Nalanda show ruins which enable one to visualize the glory of Nalanda in the Ancient past. The place preserves a living tradition and repairs carried out from time to time use original materials and traditional methods to ensure that the authenticity of the site remains undisturbed. The Pancharatna concept of planning consisting of a central shrine and four subsidiary ones in the corner can be seen in the ruins in Nalanda and this style was the essence of design of the Buddhist style of architecture that flourished and that can be seen even in Angkor Vat in Cambodia.