The name Rajgir originated from Raj Griha meaning the King’s house. During the period of Buddha’s lifetime Rajgir was the capital of the mighty Magadha Empire and the largest city in North India. It is one of the important pilgrimage centres of the Buddhists as Lord Buddha spent about 12 years in Rajgir and preached two important sermons here. After the attainment of Nirvana by Buddha the First Buddhist Council was hosted over here.

When Buddha first visited Rajgir which was the capital of Magadha on his way to Bodh Gaya in search of truth, King Bimbisara the ruler of Magadha met him and was so impressed with the young ascetic that he persuaded him to stay back. When he failed in his attempts he requested Buddha to return to Rajgir after his enlightenment. Later accordingly, followed by a thousand monks of the New order Buddha travelled to Rajgir. King Bimbisara welcomed them all and offered them the Veluvana Bamboo Grove which was one of Buddha’s favourite residences and the first property of the Order. As it was not too near the city it was ideal for solitude and meditation. The most important event of Buddha’s visit to Rajgir was the conversion of Sariputra and Moggallana who later became the Chief disciples of the Buddha. Buddha visited Rajgir on several occasions. 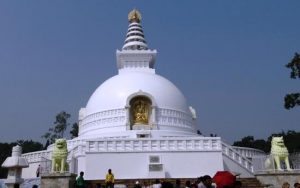 This was the seat of the royal physician Jivaka during the reign of Bimbisara and Ajatashatru where Lord Buddha was once brought to have a wound dressed by Jivaka.

King Ajatshatru the son of King Bimbisara became the King of Magadha in the 6th Century BC. He built the fort along with the 6.5 Sq mt Stupa.

The wall was once 40 kms long encircling ancient Rajgir and was one of the few Pre Mauryan stone structures ever to have been found. It was built of massive undressed stone carefully fitted together and at the exit of Rajgir to Gaya traces of the wall still exist. 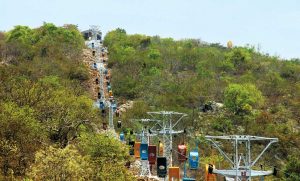 The Vishwa Shanti Stupa is built in marble and located on a 400 mt high hill. The four corners of the Stupa have four shining statues of the Buddha representing the four major stages in his life namely, his birth, his enlightenment, his teachings and his passing away. One has to come through the ‘Ropeways’ to reach the top of this hill. The hill is called Gridhakuta.

This was the site where King Bimbisara built the monastery Venuvana Vihar for Lord Buddha to reside. This was the first offering made by the King to Buddha.

This was the tank where the Buddha used to bathe.

Out of a single massive rock two strange cave chambers were carved out. One of the chambers is said to have been the guard room. There are two straight vertical lines and one horizontal line cut into the rock of the rear wall. The doorway is said to have led into King Bimbisara’s treasury. The clue to open the doorway was said to have been engraved in the wall in the form of inscriptions in the Shanklipi or shell script which have been undeciphered so far. According to folklore the treasure is still intact. The second chamber bears some seated and standing etchings on the outer wall. The first Buddhist Council after Buddha’s passing away was said to have been hosted here where the teachings of the Buddha were noted down for posterity for the first time.

It is also known as Vulture’s Peak. This was the site where the Buddha set in motion the Second wheel of Law and gave many inspiring sermons to his disciples. The two most 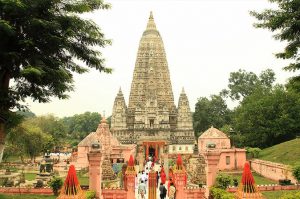 important sermons Lotus Sutra and Prajnaparamita were preached here. The Japanese Buddhists have constructed a massive Pagoda here named the Peace Pagoda or the Shanti Stupa at the top of the hill. There is an Aerial Chair Lift which operates to the top every day except Thursdays giving a beautiful aerial view over the hills of Rajgir. There is a bridle path for walkers leading upto the hill. It is said that Panthaka one of the sixteen Arahats whom Buddha sent to various parts of the world to safeguard his doctrine came to this hill and is said to be still residing there.

Besides these, there are beautiful Jain and Hindu temples and hot springs like Brahmakund in Rajgir which are said to possess medicinal properties and help to cure several skin diseases and rejuvenate and revitalise the bodies.

Rail: Though Rajgir itself has a railway station yet the nearest convenient railhead is at Gaya 78 kms.

There are a number of moderately priced hotels in the town. Tourists can stay at any of three Tourist Bungalows maintained by the Bihar State Tourism Development Corporation.

Rajgir was a very well known place during the times of the Buddha and was the capital of the powerful kingdom of Magadha that controlled the region in ancient times. Excavations by archaeologists have recovered some of the ruins though much of the ancient structures have not survived. The records of the Chinese travellers Fa Hien and Hsuan Tsang throw light on the past glory and splendour of Rajgir during the time of the Buddha and Rajgir is venerated by Buddhists from all around the world as a devout and holy place of pilgrimage to help them in their quest for enlightenment and bliss.