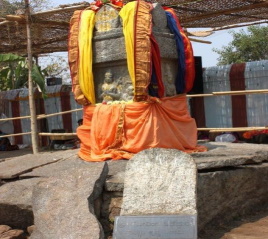 Sri Govinda Vodeyar(16th century) previously followed Advaita philosophy, but later become a dvaita saint, with the blessings of his Guru Sri Vyasaraja. He was a great pundit and contains good knowledge in all the subjects. He was defeated in the debate held with Sri Vyasaraja, and he has accepted his END_OF_DOCUMENT_TOKEN_TO_BE_REPLACED