In: Daily Prayers, Stories
With: 0 Comments 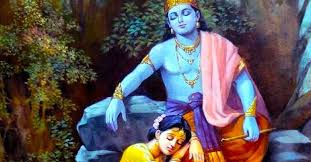 INTRODUCTION
Manjula was a noble girl who lived in a village near Guruvayur. She got the habit of daily submitting beautiful flower garlands to the Lord in the Guruvayur temple at night. One day night, when she arrived near the temple with her garlands, she found that the temple was closed. She was very much worried and began to weep, and she finally placed the garland near the banyan tree, and consoled herself, that the Lord had accepted her offering, since he is everywhere.
Next day morning, the temple Priest found one beautiful garland in the neck of the Lord, and it could not be removed by him. But Poonthanam, a great Krishna devotee, had understood the incident through his spiritual powers, and took Manjula to the temple, and he informed the incident to the temple priest.
Then Poonthanam narrated the remarkable incident to everyone and then the garland had fallen from the deity. Devotees got very happy and chanted the names of Lord Krishna, and worshipped the holy girl and also worshipped the banyan tree. Since then, the banyan tree was known as Manjulalthara.