In: Daily Prayers, Shiva
With: 0 Comments 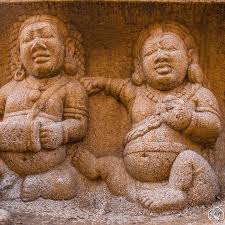 INTRODUCTION
Bringi is said to be a Shiva Gana, who is living in the Shiva Lok, the Himalayas, along with Lord Shiva and Mata Parvati, and with other divine attendants of Lord Shiva. According to legend, Bringi had obtained the position in the Shiva Loka, due to his severe penance on Lord Shiva in the earth during the first Krita Yuga. He was considered as one of the main attendants of Lord Shiva, similar to Lord Nandhi and Lord Chandikeswara. He greatly respects the divine couple, and considers Shiva-Parvati as his divine father and mother.
According to legend, he was present along with Lord Shiva, when Shiva consumed the Halahala poison, in order to safeguard the earth and heaven from destruction. And according to ancient Puranas, he would be residing in Mount Kailash permanently, and would do sincere service to Shiva-Parvati and used to chant the Shiva mantra “OM NAMA SHIVAYA” continuously and looks always cheerful and happy. He also used to play the drums when Lord Shiva dances.
Let us worship the divine Shiva Gana and be blessed.
“OM SRI SHIVA GANA BRINGIYE NAMAHA”
“OM SHIVA SAKTHI NAMO NAMAHA”
“OM SRI VIGNESWARAYA NAMAHA”
WRITTEN BY
R.HARISHANKAR