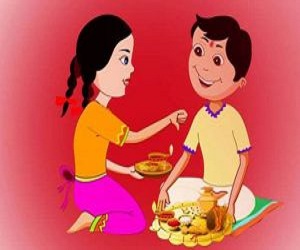 BhaiDooj is a Hindu family festival which strengthens the brother-sister relationship adding all the more flavor of affection to it. The word ‘Bhai’ means brother while ‘Dooj’ represents the second day of the month in which the festival is celebrated.

BhaiDooj or BhaiTika or BhaiPhota is celebrated on the last day of the five day long Diwali festival. This is the second day of the bright fortnight or ShuklaPaksha of the Hindu month of Kartika. On this day, thesister prays for her brother’s long life by performing a Tika ceremony following which the brother surprisesher with lovely gifts.

Different names of the festival –

In West Bengal it is called BhaiPhota and takes place every year on the first or the second day of the Kali Puja festival.
It is also known as BhaiBij, BhauBeej or BhavBij amongst the Marathi and Konkani speaking communities residing in the states of Maharashtra, Goa and Karnataka.
In the land of Nepal, BhaiTika is the second most important festival after VijayaDashami.
In Manipur this festival is celebrated under the name NingolChakuba.
Another name for this festive occasion is Yamadwitheya or Yamadvitiya.Yamadwitheya is named after a legendary meeting between Yama, the God of Death, and his sister Yamuna.
Other names include BhathruDwithiyaand BhatriDitya.

BhaiDooj comes twice a year, once after Holi and again after Diwali. The name itself denotes the day of the festival i.e.Dooj, the second day after the full moon or new moon.

Since Holi is played on Parva, the day after the full moon, BhaiDooj is celebrated after the Parva, i.e. the day following Holi.

Again as Diwali is celebrated during an absolutely dark night (new moon), the Dooj comes two days after the Diwali.

BhaiDooj signifies the paramount importance of a brother in a sister’s conscience. On this lovely occasion she prepares a Puja Thali for her brother, consisting of very auspicious items including a tika.

It is a general ritual that the sister, whether married or unmarried, does the puja at her mother’s place, before her brother leaves for his study or work. In case of any inconvenience, the puja can be arranged in the evening as well.

If the sister lives in a different town and is unable to visit herself, the tika along with a little roli and rice can be sent to the brother’s place.

In her absence the money can be given to the sister-in-law to buy the necessary items on behalf of the sister.

Puja Room:There is no special Deity for this puja. The puja is generally performed in a separate puja room, or on the same chowk that had been decorated for Diwali.The Diwali chowk should not be cleaned up until the Dooj puja.

As per the tradition, noseparate chowkis decorated at the time of Holi. Hence the puja is performed in a regular puja room.

Arrangements Done: The sister decorates the mithai, batashas, roli and rice along with the coconut. The puja lamp is lit; everyone does the puja, and the sister applies the tika on her brother’s forehead. She gives him a few of the eatables along with the coconut. The brother takes some portion to eat, and he is then free to move out, while the women and children sit around to hear the legend behind the BhaiDooj festival.

The BhaiDooj festival definitely bonds the sister not only with her brother but also with her parents and rest of the family.

For a married girl, it is a good time for a get-together with her own family and she can discuss the events of the big festivals that have preceded BhaiDooj. Especially for a newly married girl, this festival has a special significance. During her BhaiDooj visit she shares with her mother, sisters and brothers what she received during Diwali orHoli celebrations.

Along with the jewelry and clothes, she also brings home the love and affection which she has acquired at her in-laws place. She talks about the excitement of having ‘shut up’ her in-laws during Holi, how she had to sing to get her present, or how everyone made a beeline for her and her husband with the pichkaris, and how she was dumped in the tub, and how the different foodstuffs tasted in different homes and so many other things!

West Bengal: The state of West Bengal celebrates the BhaiDooj festival as BhaiPhota or BhaiFota. As per the state ritual the sister fasts from the morning till the BhaiPhota ritual is performed. As part of the puja she puts on a tikamade up of ghee, sandalwood paste and kaajal on her brother’s forehead following which an ‘arati’ is performed. There is also a special tradition in which the elder siblings give rice and durba, a type of grass, to the younger ones. The rice symbolizes plenty and durba is for longevity. BhaiPhota special sweets like Kheer and Coconut Laddoos are a must-eat on this day.

Nepal: In Nepal the BhaiDooj festival is called BhaiTika or BhaiTeeka. As Tiharis the name given to Diwali in Nepal, the BhaiDooj festival is also known as BhaiTihar. On the auspicious day of BhaiTika, a special ‘PaanchRangiTika’ containing five colors including green, red, blue, white and yellow bear a special significance. As per tradition, the sister applies ‘PaanchRangiTika’ on her brother’s forehead and draws mandaps in the name of God using Doob grass to carry out the Tika ceremony. Here the festival symbolizes that no one including Yamraj(the God of Death) can cross the boundary protected by the loving sister.

Maharashtra and Goa: As the fifth day festival of Diwali, BhaiDooj is also celebrated in Maharashtra and Goa states as BhavBij or BhauBeej. The sister draws a special square shaped space on the floor where her brother has to be seated for BhavBij ceremony. But, before that the brother is made to eat a bitter fruit called Karith. The tradition has come from the legend when Lord Krishna tasted this fruit before he went for a fight with demon Narakasura. Special dishes like BasundiPoori or Shrikhand Poori are also made during BhavBij festival.

Gujarat: In Gujarati, BhaiDooj festival is calledBhaiBeej or BhaiBij. Here the rituals are performed with equal zeal and zest, where the sisterputs sacred tikaon her brother’s forehead, performsarti and prays for her brother’slong and safe life.

Bihar:The Bhai Dooj festival in the state of Bihar is celebrated in a unique way, where the sister would curse her brother and prick her own tongue as punishment for cursing him. She would then ask him to forgive her past mistakes.

After the forgiving episode, the brother blesses his sister while the sister prays for her brother’s welfare. There is a custom in Bihar that the brother should swallow a few grains of bajri with water, before eating special BhaiDoojsweets from his loving sister’s hand.

Punjab:In Punjab state, BhaiDoojfestival is known as ‘Tikka’. Here the tika which a sister would put on her brother’s forehead is made up of saffron and rice paste so that no harm comes near her brother.

Uttar Pradesh:In the state of Uttar Pradesh, BhaiDooj festival is celebrated in a traditional Hindu method. The sister appliesatika paste, made up of roli and rice, on her brother’s forehead after which she prays and performsarti to shed off the evil effects. In return the brother gifts his sister an `aabf’- a length of flax, knotted into a circular shape and dotted with sugar batashas.

It is believed that the safety and security of women forms the basis behind the shaping of BhaiDooj as a national festival. But, there are also several mythological narrations on which various customs and traditions of BhaiDooj are based. The most popular story is mentioned below:

It is believed that once Yamraj (the God of death) visited his sister Yami. His sister became very delighted to see him and applied a tika on his forehead. At this, Yamraj became so happy that he announced that any sister who will apply tika on her brother’s forehead on that particular day would set him free from the fear of death and hell. From that day onward, the tradition of BhaiDooj came into existence.

The famous legends associated with BhaiDooj are as follows:

The Legend of Lord Vishnu: According to this legend, when LordVamadev was pleased with Bali Maharaj and appeared as Vishnu, Bali asked a boon that Lord Vishnu would be on every door at Patalaloka. Vishnu agreed and went on to become a Dwarpalaka of Bali. While hearing about this from Narada, Lakshmi became upset and decided to outwit Bali so that her husband could return to his original place.

She went to Bali as a poor woman seeking help and said that as she did not have a brother would dearly like having one.Bali acceptedher as his sister and told her to ask for a boon. Lakshmi earnestly replied that since he had everything at his command he would better release Lord Vishnu. Thus, Lord Vishnu becomes free from the service of Bali.

The Legend of Yamaraj and Yamuna: According to Veda, Yama or Yamraj is the son of Vivasvat. He had a twin sister named Yami or Yamuna. Yami, Yama’s twin sister, was transformed into the sacred river Yamuna in whose purifying waters people bathe on holy days. Yama was given an equally important role and made the God of Death. On BhaiDooj day, Yamaraj was called to his sister Yamuna’s home, where she offered himartiwhile he offered her a small gift in return.

Yama then told her that on this day brothers would be invited to their sisters’ home and in return the brother would bring a gift for his sister. Until today this tradition is maintained with great love. Again, asYama’s sister fed him to his satisfaction he said that from now on any brother who visits his sister on BhaiDhuj day will escape the hand of Yamaraj.

The Legend of Lord Mahavir: Another legend behind the origin of BhaiDooj says that when Mahavir, the founder of Jainism, attained nirvana, his brother King Nandivardhan was distressed because he missed him and was comforted by his sister Sudarshana. Since then, sisters have been revered during BhaiDooj.

The Legend of Lord Krishna:According to legend, on the auspicious day of BhaiDooj, Lord Krishna, after slaying demon Narakasura goes to his sister Subhadra where she welcomes her brother with lamp, sweets, flowers, etc and applies the holy protective tikaon his forehead. Keeping this legend in mind, people celebrate the festival of BhaiDooj with great enthusiasm and fervor.

English Translation: I’m your sister, eat this sacred rice, for the pleasure of “Yamraj” and “Yamuna”.

Bhai Dooj celebrations all over India