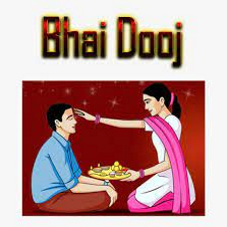 Bhai Dooj, Bhaubeej, Bhai Tika or Bhai Phonta is a festival celebrated by Hindus on the second lunar day of Shukla Paksha (bright fortnight) in the Vikram Samvat Hindu calendar or of Shalivahan Shaka calendar month of Kartika. It is celebrated during the Diwali or Tihar festival and Holi festival. The celebrations of this day are similar to the festival of Raksha Bandhan. On this day, brothers give gifts to their sisters. In the southern part of the country, the day is celebrated as Yama Dwitiya.[2] In the Kayastha community, two Bhai Doojs are celebrated. The more famous one comes on the second day after Diwali. But the lesser-known one is celebrated a day or two after Diwali. In Haryana, a ritual also followed, a dry coconut (named gola in regional language) with klewa tied along its width for worshipping is also used at the time of doing aarti of a brother.

The festival of Bhai Dooj has a literal meaning attached to it. It is made up of two words namely- “Bhai” meaning brother and “Dooj” meaning the second day after the new moon which is a day of its celebration.

The day holds the special significance into the lives of a brother and a sister. It is an auspicious occasion that celebrates the strong bonding between Brother and Sister. Sisters invite their brothers to visit their place and prepare the beloved dishes for them. Sisters also pray to God for the well-being and longevity of their brothers against all the evils and bad fortune. In return, brothers follow their responsibilities of caring and loving their sisters.

There are few Hindu mythological based stories related to the origin of this auspicious day. According to the one legend, Lord Krishna visited his sister, Subhadra after killing demon Narkasur. Her sister gave a warm welcome to him and made the occasion really special through flowers and sweets. Subhadra also applied the ceremonial “tilak” on the forehead of her brother, Krishna and hence the festival of “Bhai Dooj” was born from there.

Another legend revolves around the story of Yama, the God of Death and his sister Yamuna. It is believed that he met his beloved sister on Dwitheya, the second day after the new moon and thus the occasion began to be celebrated as “Yamadwitheya” or “Yamadvitiya” across the country from that day.

The day got famous for the sweet bond of siblings and their love and every year people celebrate this occasion of Bhai Dooj. India is all about mythological beliefs and stories but in other terms, it is also good because it gives us a chance to meet our near and dear ones at least once in a year.