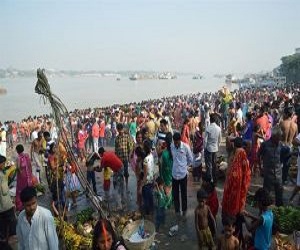 Dala Chatt) is an ancient Hindu Vedic Festival dedicated to the Sun God Surya, also known as Surya Shashti. There is no vratta (fasting) as severe as Chatt. It is one of the most rewarding fasts.

Lord Kartikeya or Skanda the first Son of Shiv and Parvati is prayed to on this occasion along with the Sun. The Chatt Pooja is performed in order to thank Surya for sustaining life on earth and to request the granting of certain wishes. The Sun, considered the God of energy and of the life-force, is worshiped during the Chatt festival to promote well-being, prosperity and progress. In Hinduism, Sun worship is believed to help cure a variety of diseases, including leprosy, and helps ensure the longevity and prosperity of family members, friends, and elders.

The rituals of the festival are rigorous and are observed over a period of four days. They include holy bathing, fasting and abstaining from drinking water (Vratta), standing in water for long periods of time, and offering prasad (prayer offerings) and aragh to the setting and rising Sun.

ChattPooja is mainly famous in Bihar, Jharkhand, Eastern UP and the Terai regions of Nepal, but this festival is also celebrated in the northeast region of India including Madhya Pradesh, Uttar Pradesh, Chhattisgarh, Chandigarh, Gujarat, Delhi, Mumbai etc.

Kartikeya, the son of Lord Shiva and Goddess Parvati or Shakti, is known by many names Subramaniam, Sanmukha, Shadanana, Skanda and Guha. In the southern states of India, Kartikeya is a popular deity and is better known as Murugan.He is an embodiment of perfection, a brave leader of God’s forces, and a war God, who was created to destroy the demons, representing the negative tendencies in human beings.

Kartikeya’s other name, Shadanana, which means ‘one with six heads’ corresponds to the five senses and the mind. The six heads also stand for his virtues enabling him to see in all the directions – an important attribute that ensures that he counters all kinds of blows that can hit him.The war imagery and the six heads of Kartikeya indicates that if humans wish to lead themselves efficiently through the battle of life, they must always be alert lest they are shown the wrong path by crafty people with the six demonic vices: kaama (sex), krodha (anger), lobha (greed), moha (passion), mada (ego) and matsarya (jealousy).

Kartikeya carries a spear in one hand and his other hand is always blessing devotees. His vehicle is a peacock, a pious bird that grips with its feet a serpent, which symbolizes the ego and desires of people. The peacock represents the destroyer of harmful habits and the conqueror of sensual desires. The symbolism of Kartikeya thus points to the ways and means of reaching perfection in life.

Houses are cleaned and white washed. In the villages fresh cow dung is applied to the courtyards and the walls of the houses. This gives stiffness to the surface as it dries and acts as a firm finish to the walls and courtyards. During this week people refrain from telling lies, smoking and gambling. They also become vegetarians for the duration. The ladies of the house, who usually perform the fast, leave the men to pursue their usual occupations outside the home. Some men keep vratta from the first day of Chatt onwards, the food is without garlic or onions and it must be vegetarian.

There is no restriction as to the number of times one can eat. Coffee and tea are allowed throughout the day.

On the first day of the pooja the devotees take a holy dip. They clean their house and surroundings and are allowed only one meal on this day which is also known as kaddu-bhat.

The food is cooked outside the main kitchen preferably in a courtyard where a chulha is made out of bricks. Some cow dung is applied onto it and the surrounding area.No one is allowed near the chulhawith shoes on and no one can cook until they have bathed and worn absolutely clean clothes. The utensils used for cooking should be new if they are not, then they are washed with gobar (cowdung) or mitti (dry mud) to make them pure. The fire lit in the chulha is of wood.

The devotees observe fast for the whole day which ends in the evening after the Sunset. They worship the earth and distribute rasiao-kheer, puris and bananas to the family and friends. After this, the devotee observes fast for the next 36 hours. They don’t even consume water during this time.

From the morning of the third day, those who are observing the fast start preparing for the evening when each one offers argh to the God Sunalong with the following items:

The devotee spends the day preparing prasad and in the evening the person who is observing the fast goes to a river bank, pond or any other water body, along with his/her family members. The devotee offers prayers to the setting Sun.

Kosi: The devotees observe Kosi on the night of the third day. They light diyas under a canopy of five sugarcane sticks. These sticks represent the Panchatattva or the five elements that the human body is made of and the diyas represent Surya or the Sun God.

Bihaniya Aragh: On the final day of the ChattPooja, people go to the water wearing clean or new clothes and walking bare feet & doing the Dhaud Pranam, which means lying down on the ground, face down and hands joined in prayer over the head, then getting up and again lying down at the spot where the hands were, and very slowly proceeding towards the river or tank.

Agarbatti, dhoop and flowers are thus raised and presented to the Sun. Prayers are performed silently. Everyone remains in the water until the Sun has set completely. The Chatt has so much importance that even a millionaire begs for prasad at the Chattghat. This symbolizes that all persons are equal in front of the almighty.

Make a watery solution by mixing jaggery, water, and green cardamom.Add 4 tbsp ghee to the jaggery syrup prepared above and mix it to wheat flour, along with coconut and make dough of it. Remember to use the exact quantity of jaggery syrup to make dough.Take a piece of dough, press it flat against your palm and then press it on a saancha for making Khajuree.Once the Khajureehas acquired the imprint from the saancha, deep fry it in ghee till it turns reddish brown.Filter out the ghee and put them aside.Allow the Khajurees to cool down and serve.

Large numbers of people in Patna throng the banks of the Ganga Riverto celebrate the festival of ChattPooja or worship the SunGod. The festival is especially significant for married women who observe a two-day fast and offer prayers standing waist-deep in water for at least two hours and offer fruits and flowers to Surya, the Sun God.  People go to bathing ghats on river banks with traditional music and pay obeisance to both the rising and the setting Sun during the festival.

The Chatt Festival is basically a major festival of Bihar, but is celebrated with equal devotion in Delhi as well. For Chatt celebrations in New Delhi, several ghats at the River Yamuna in the city are reserved. The pooja takes place at these ghats only. Performed both by men as well as by women, the pooja preparations start by the end of Diwali.

There are nearly 10 Lakh people from Bihar and Uttar Pradesh in Mumbai. They celebrateChattpoojaat Juhu Beach.

Hindus in Terai region of Nepal also celebrate the first day of Chatt, an ancient Hindu festival dedicated to the Sun God, Surya. The festival is performed on KartikaShuklaShashti, which is the 6th day of Kartik month in the Nepali calendar. People of Terai celebrate Chatt festival in the capital city by congregating around ponds and streams in Ranipokhari, Thapathali, Aurighat, Balkhuamong other places.

It is believed that “Draupadi” the wife of the Pandavs- rulers of Hastinapur- had performed the Chatt –Vratta. Seeing thePandavas in deep trouble Draupadi sought the help from the noble sage Dhaumya who impressed upon her the merits of worshipping the Sun God. Draupadi was not only able to solve her immediate problem but her Sun worship helped the Pandavas regain their lost kingdom later.

However its history dates back to the Vedic times. The rishis of yore usedthis method to remain without any external intake of food as they were able to obtain the solar energy directly from the Sun rays. This was done through Chatt method.

Surya is the only visible God whom we can see, perceive and pray. The Sun God is considered as the life-giver, ”Prana data” of the entire Universe. Surya is essential for life. All Vedas regard Surya as the witness (Saakshi) of all actions performed by any living or nonliving being. Thus Sun or Surya is also known as ”Aatmakaraka”. A Sanskrit word, ”Aatma” means ”soul” and ”Karaka” means ”indicator”. The Sun is the ”indicator of the soul”. It is the indicator of our ego, honor, status, fame, the heart, the eyes, general vitality, respect and power including parenthood.

The following mantras are also dedicated to the Sun

The Tantrik Mantra of the Sun:

The Vedic Mantra of the Sun:

“O God, Thou art the giver of life, the remover of pain and sorrow, the bestower of happiness; O Creator of the Universe, may we receive thy supreme, sin-destroying light; may Thou guide our intellect in the right direction.”

The Sun can be propitiated through these mantras but among these Beeja Mantras are more popular. By undertaking this “Anushthana” one can remove the malefic effects of the Sun especially when performed in the Major Period (Mahadasha) or Sub-Periods (AntarDashas) of the Sun. The Hindu scriptures present the Sun as the most potent God. There are only five Pauranik Gods and Sun is one of them but the images of the remaining four Gods — Vishnu, Shiva, Ganesh and Durga — are also found in Him.

In Surya Sahasranaam several synonyms of the Sun are actually Vishnu’s names and at one place He is also called Jyotirlinga, representing Shiva. Mahakaal is both the name of Shiva and the Sun. Ganesh, the son of Shiva, is also represented in the Sun. Image of the rising Sun in a water reservoir or pond appears like an elephant’s trunk due to the ripples, resembling Ganesh. Gayatri and Savitri are forms of the Sun. Adityais also derived from Aditi, which is the name of Durga. The worship of Sun means the worship of all the five Pauranikdeities.