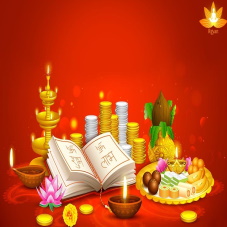 Dhanteras marks the official beginning of Diwali, the festival of lights. It is celebrated on the thirteenth day of the Kartika Krishna Paksha in the month of Kartik. Dhanteras 2021 will be celebrated on 2 November 2021.

It is also widely known as Dhantrayodashi and is a day where devotees pray to Goddess Lakshmi (the Goddess of wealth), Lord Kubera (the God of treasure), and Yamaraj (the king of Yamlok and the God of death).

Dhanteras is a day that is considered extremely auspicious to start new beginnings or invest in new businesses. People generally buy gold and silver jewellery or buy new utensils as a symbolic gesture to welcome Goddess Lakshmi into their homes.

According to a popular legend, when the devas and asuras performed the Samudra manthan (churning of the ocean) for Amrita (the divine nectar of immortality) Lord Dhanvantari,emerged during Samudra Manthan, holding a Kalasha full of Amrit (an Ayurvedic herbal mix bestowing immortality) in one hand and the sacred text about Ayurveda in the other hand. He is considered to be the Vaidya of Gods.

The festival is celebrated as Lakshmi Puja which is performed in the evenings when lamps of clay (Diyas) are lit. Bhajans, devotional songs in praise of Goddess Lakshmi, are sung and Naivedhya of traditional sweets is offered to the Goddess. A peculiar custom in Maharashtra exists where people lightly pound dried coriander seeds (Dhane in Marathi, for Dhanatrayodashi) with jaggery (cane sugar) and offer the mixture as Naivedhya.

On Dhanteras, homes that have not yet been cleaned in preparation for Diwali are thoroughly cleansed and whitewashed, and Lord Dhanvantari, the god of health and Ayurveda, is worshiped in the evening. The main entrance is decorated with colorful lanterns, holiday lights and traditional motifs of Rangoli designs are made to welcome the Goddess of Wealth and Prosperity. To indicate her long-awaited arrival, small footprints are drawn with rice flour and vermilion powder all over the house. On the night of Dhanteras, diyas (lamps) are ritually kept burning all through the night in honor of Lakshmi and Dhanvantari.

Hindus consider this an extremely auspicious day for making new purchases, especially of gold or silver articles and new utensils. It is believed that new “Dhan” (wealth) or some item made of precious metal is a sign of good luck. In modern times, Dhanteras has come to be known as the most auspicious occasion for buying gold, silver, and other metals, especially kitchenware. The day also sees heavy purchases of appliances and automobiles.

On this night, the lights are set out every night both in the sky lamps and as offerings at the base of a Tulsi plant and also in the form of diyas, which are placed in front of the doorways of homes. This light is an offering to Yama, the Host of Death, to avert untimely death during the time of the Diwali festival. This day is a celebration aimed at increasing wealth and prosperity. Dhanteras engages themes of cleansing, renewal, and the securing of auspiciousness as embodied by Lakshmi

In the villages, cattle are adorned and worshiped by farmers as their main source of income.

On Dhanteras, people worship Goddess Lakshmi for a prosperous life and well being. In the evening hours, after getting rid of all waste and cleaning the house thoroughly, a lamp is lit to mark the sanctity of the house. Devotional hymns are sung eulogizing the Goddess of wealth and sweets and fruits are offered to her.

Hindus worship Lord Kuber as he is considered a treasurer of wealth and bestower of riches, along with Goddess Lakshmi on Dhanteras.

Generally, most of the Hindus choose Dhanteras to invest in gold bars or jewellery. Utensils and new clothes are also bought on this auspicious occasion. People flock to the jewellers and buy gold or silver jewellery and utensils to venerate the occasion of Dhanteras. Dhanteras embraces a unique worth for the business communities as they make customary purchases of the valuable metals on this day.

What is the story behind celebration of Dhanteras?

While the preparations of Diwali celebrations are on their full swing, Dhanteras adds on a new dimension to it. There is a very interesting story that backs this Hindu festival. The son of King Hema was intended to die on the fourth day of his marriage. The king and queen wanted their son to enjoy all goodness of life and therefore they got him married. The fourth day of his marriage was the disgraceful day.

On the fourth day, his wife did not let him sleep and placed lots of gold & silver coins around him and the gate was blocked with these coins. Moreover big lamps were lightened all around the palace. She kept telling her husband various stories and sung songs so as to keep him awakened. As Yama, the God of death came, in the guise of a serpent; he could not enter the room of the Prince as his eyes were stupefied by the flash of gold and silver. Leaving the coins aside, he then got lost in the songs sung by the princess and the way the entire palace was decorated. The next morning Yama had to turn back to his world. In this way the girl saved her husband’s life.

Because of the above told story, this day is also called ‘Yamadeepdaan’. Lamps are kept burning throughout the night in the honor of Yama. Another amazing legendary story associated with Dhanteras is that of ‘Samudra Manthan’. When Lord Indra along with a team of demons churned the sea to nullify the curse of Sage Durvasa, Goddess Lakshmi emerged from the sea with ‘Necter’ (Amrit).

Dhanteras is celebrated with a lot of enthusiasm which makes bonds of love and relationships stronger. Along with the Lakshmi Pooja, children add fun to the day by bursting colourful crackers and rockets. Dhanteras is a very fortunate day and people start all the new activities on this day. People love celebrating Diwali & Dhanteras and Dhanteras creates a cheerful and positive atmosphere all over the country.

Dhanteras is a major Hindu festival and holds much importance in the overall Diwali celebrations. The main festival of Diwali is incomplete without Dhanteras. It marks a prosperous and happy beginning for one of the India’s most important festivals. The rituals of celebrating Dhanteras may differ from state to state but at the core of it is the celebration of prosperity and health.