In: Festivals, Festivals Of The Month
With: 0 Comments 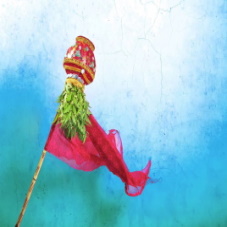 Gudhi Padwa(Marathi: गुढी पाडवा) is a spring-time festival that marks the traditional new year for Marathi and Konkani Hindus, but is also celebrated by other Hindus as well.[2] It is celebrated in and around Maharashtra, Goa, and the union territory of Damaon on the first day of the Chaitra month, to mark the beginning of the new year according to the lunisolar method of the Hindu calendar. Padava or paadvo comes from the Sanskrit word pratipada, which is the first day of a lunar fortnight. The spring festival is observed with colourful floor decorations called rangoli, a special Gudhi dvaja (a cloth or saree garlanded with flowers, mango& neem leaves, garland of sugar called gathi,topped with upturned silver or copper vessels), street processions, dancing& festive foods.[2][3]

In Maharashtra, first day of the bright phase of the moon is called Gudhi Padwa in Marathi, pāḍya (Konkani: पाडयो; Kannada: ಪಾಡ್ಯ; Telugu: పాడ్యమి, paadyami). Konkani Hindus variously refer to the day as सौसार पाडवो or सौसार पाडयो (saṁsāra pāḍavo / saṁsāra pāḍye), संसार (saṁsāra) being a corruption of the word संवत्सर (saṁvatsara). Telugu Hindus celebrate the same occasion as Ugadi, while Kannada Hindus in Karnataka refer to it as युगादि, ಯುಗಾದಿ (yugādi). The Sindhi community celebrates this day as Cheti Chand as the new year and observed as the emergence day of Lord Jhulelal. Prayers are offered to Lord Jhulelal and the festival is celebrated by making delicacies like Tahiri (sweet rice) and Sai Bhaji (spinach cooked with a sprinkle of chana dal).[4]

However, this is not the universal new year for all Hindus. For some, such as those in and near Gujarat, the new year festivities coincide with the five day Diwali festival. For many others, the new year falls on Vaisakhi between 13 and 15 April, according to the solar cycle part of the Hindu lunisolar calendar and this is by far the most popular not only among Hindus of the Indian subcontinent but also among Buddhists and Hindus in many parts of southeast Asia.

A notable sight during Gudhi Padwa are the numerous Gudhi (or Gudhi) arrangements at every household. It is a bright colourful silk scarf-like cloth or saree tied at the top of a long bamboo. On top of it, one or more boughs of neem leaves and mango leaves are attached along with a garland of flowers and garland of sugar called gathi. This arrangement is capped with a silver, bronze or copper pot (handi or kalash) signifying victory or achievement. The whole arrangement is hoisted outside each household, typically to the right, or through a window or terrace. It is visible to everybody. Villages or neighbourhoods also come together and host a community Gudhi Kavad, which they carry together to the local Shiva temple.

Some temples are located on the top of hills, and groups work together to help reach the kavad to the top.

Rangoli made on Gudhi Padwa

On the festive day, courtyards in village houses will be swept clean and plastered with fresh cow-dung. Even in the city, people take the time out to do some spring cleaning. Women and children work on intricate rangoli designs on their doorsteps, the vibrant colours mirroring the burst of colour associated with spring. Everyone dresses up in new clothes and it is a time for family gatherings.

Traditionally, families prepare a special dish that mixes various flavours, particularly the bitter leaves of the neem tree and sweet jaggery (gur, gul). Additional ingredients include sour tamarind and astringent dhane seeds. This, like the pacchadi recipe used in Ugadi festival, is eaten as a reminder of life’s sweet and bitter experiences, as well as a belief that the neem-based mixture has health benefits.

Maharashtrian families also make many other festive dishes, such as shrikhand and Poori or Puran Poli on this day.