The name of the festival is Janam Ashtami or Janmashtami.

Janmashtami is celebrated to commemorate the birth of Lord Krishna. On this occasion, a special pooja is dedicated to child Krishna and a lot of delicious delicacies are prepared. Janmashtami is celebrated during the Ashtami of the Krishna Paksh or the eighth day of the dark fortnight, in the month of Bhadon i.e. either in the month of July or August.

Janmashtami is celebrated over a period of two days i.e. once on the actual day of his birth in the prison at Mathura and the next on the next day, on being discovered at the house of Yashoda, located at Gokul.

Janmashtami is celebrated across India, especially in the northern parts of India and Mathura and Vrindavan. It is celebrated with great pomp and fervor, on the occasion of the birth of God on Earth. 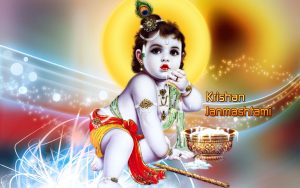 How Janmashtami it celebrated

The occasion of Janmashtami is celebrated by observing fast up to midnight, which is believed to be the exact time when Lord Krishna was born.

At midnight, all the devotees gather to celebrate the birth of Lord Krishna and sing devotional songs, exchange gifts and dance in tune with the Bhajans.

Images of infant Krishna is placed on swings and cradles and worshipped during this occasion. 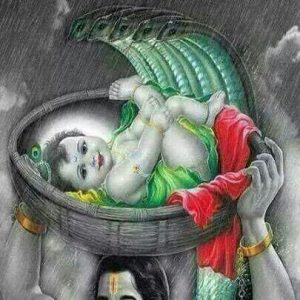 On the occasion of Janmashtami, items directly related to the childhood of Lord Krishna are displayed. Small dolls are dressed up and decorated as Gopis and Radha.

An ambience like Raasleela is created and children get very busy arranging the items. Fasting is observed by most of the families on this occasion.

However, only one meal is allowed during the day, which is also known as Phalahar, which consists of fruits, curds, mithai and KuttuSinghare-ki-Puri.

The prasad to be distributed in the evening is also known as Paggi-Hui-Meuea. Different fruits, kaasar and charnamrit are also distributed as prasad amongst the devotees. 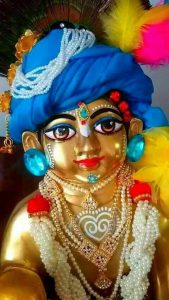 Procedure to do the pooja

The performance of the pooja is initiated early in the morning, when devotees bathe the idol of Bal Gopal (infant Lord Krishna) with ghee, gangajal, water, honey and curd.

The idol is then adorned with new clothes, preferably of yellow color. Then, Bhog is offered to Bal Gopal, items such as fruits, kheer, pedha, milk and milk products are offered to the Bal Gopal. Some devotees also offer Chappan Bhog or fifty-six different dishes.

After the offering of Bhog, a special Krishna pooja is performed. The cradle containing the idol of Bal Gopal is rocked continuously accompanied to the blowing of the conch.

The 108 names of the Lord are also read out aloud and all the devotees are completely immersed in the divine experience. The time of performance of the pooja and the breaking of the fast varies from place to place. 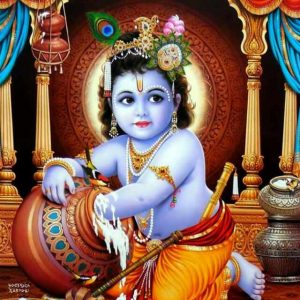 Naradamuni had informed Kansa, the maternal uncle of Krishna and the cruel king of Mathura, that Kansa would be killed by the eighth child of his sister, Devaki.

Devaki was just married to Vasudeva. Naradamuni also tried to confuse Kansa and infuriated him by provoking him further.

Kansa got extremely angry and to protect his greed and lust for power, he imprisoned both Vasudeva and Devaki.

Every year, a child was born to them and Kansa killed each and every one of them.

When the eighth child was born, all the prison guards went asleep and the shackles of both Vasudeva and Devaki were freed.

As soon as the prison gates flung open, a divine voice ordered Vasudeva to go and exchange the child with the little new born girl of Nanda and Yashoda, who lived in Gokul.

Vasudeva followed the divine command and placed infant Krishna on a chaaj and tried to cross the river, in the torrential rain.

As soon as Vasudeva reached Gokul, he exchanged the boy with the little girl present there, as all the attendants and both Nanda and Yashoda were asleep.

After Vasudeva brought the little girl into the prison, all the shackles were re-fixed, the prison doors closed and the prison guards woke up. Soon the news about the birth of the eighth child reached Kansa.

He soon came and flung the little child against the prison walls.

Instead of dying, the child flew into the sky and uttered ‘0Kansa!Your destroyer has already been born, and is elsewhere’. The little girl is worshipped today as Durga, Tara, Ishani and Mandakini.

o   The most important aspect of celebrating Janmashtami is the observance of Dharma. Lord Krishna himself is believed to redeem mankind from Maya or Illusion and establish Dharma in this Samsara.

o   Janmashtami is also celebrated to glorify the magnificence of Lord Krishna, who reincarnates himself whenever there is predominance of evil.

It is believed that child Krishna used to steal butter from the Gopis. Once, these Gopis complained to Krishna’s mother Devaki, who tied him with a rope and scolded him for his actions. But Devaki’s heart melted as soon as she saw Krishna smile and she hugged him.

Thus, Krishna is also known as Devakinanadan and Makhanchor (one who steals butter).

DahiHandi is celebrated to mimic this stealing of butter. An earthen pot is filled up with milk, ghee, butter and dry fruits, and is tied with the help of rope.

Groups of men flock together and form human pyramids, to break the pot. Later, Dahikala i.e. the contents of the pot, are distributed amongst those present.

One of the most important features of Janmashtami, is Raasleela. It is a divine sport that was played by Sri Krishna and the Gopis. Raasleela was played on the banks of the River Yamuna, at Vrindavan.

Amongst all the Gopis, Radha was the most special. Her love for Sri Krishna was pure and comprehensive. Sri Krishna performed the Raasleela, when he was just ten years old.

Celebration of Janmashtami across the states

Janmashtami is celebrated across different states in India. They are celebrated in the following states:

Janmashtami is celebrated exactly eight days after RakshaBandhan. The intervening period of seven days is believed to be the time for purifying the soul and getting reborn again.

It is also considered to be the period when all the evil and negativism should be purged to attain communion with the Almighty.