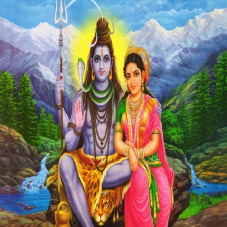 Maha Shivaratri (IAST: Mahāśivarātri) is a Hindu festival celebrated annually in honour of the god Shiva. The name also refers to the night when Shiva performs the heavenly dance called Tandava.

It is a major festival in Hinduism, and this festival is solemn and marks a remembrance of “overcoming darkness and ignorance” in life and the world. It is observed by remembering Shiva and chanting prayers, fasting, and meditating on ethics and virtues such as honesty, non-injury to others, charity, forgiveness, and the discovery of Shiva. Ardent devotees keep awake all night. Others visit one of the Shiva temples or go on pilgrimage to Jyotirlingams. The festival has been integral to Hinduism and its origin predates recorded history, but some western indologists believe this festival originated in 5th century BC. According to the South Indian calendar, Maha Shivaratri is observed on Chaturdashi Tithi during Krishna Paksha in the month of Magha, and in other parts of India, on 13/14 night of Krishna Paksha in Phalguna of Hindu calendar, the Gregorian date however remaining the same.

In Kashmir Shaivism, the festival is called Har-ratri or phonetically simpler Haerath or Herath by Shiva devotees of the Kashmir region. In recent years, the Isha Foundation has been a major patron of such festivities in India, with even Prime Minister Narendra Modi having attended the celebration hosted at the site of the Giant Adiyogi in Coimbatore.

The Maha Shivaratri is mentioned in several Puranas, particularly the Skanda Purana, Linga Purana and Padma Purana. These medieval era Shaiva texts present different versions associated with this festival, and mention fasting, reverence for icons of Shiva such as the Lingam.

Different legends describe the significance of Maha Shivaratri. According to one legend in the Shaivism tradition, this is the night when Shiva performs the heavenly dance of creation, preservation and destruction. The chanting of hymns, the reading of Shiva scriptures and the chorus of devotees joins this cosmic dance and remembers Shiva’s presence everywhere. According to another legend, this is the night when Shiva and Parvati got married. A different legend states the offering to Shiva icons such as the linga is an annual occasion to get over past sins if any, to restart on a virtuous path and thereby reach Mount Kailasha and liberation.

The significance of dance tradition to this festival has historical roots. The Maha Shivaratri has served as a historic confluence of artists for annual dance festivals at major Hindu temples such as at Konark, Khajuraho, Pattadakal, Modhera and Chidambaram. This event is called Natyanjali, literally “worship through dance”, at the Chidambaram temple which is famous for its sculpture depicting all dance mudras in the ancient Hindu text of performance arts called Natya Shastra. Similarly, at Khajuraho Shiva temples, a major fair and dance festival on Maha Shivaratri, involving Shaiva pilgrims camped over miles around the temple complex, was documented by Alexander Cunningham in 1864.