Shivaratri is celebrated on the 6th night of the dark Phalgun (Feb or March) every year. On this auspicious day, devotees observe fast and keep vigil all night. Mahashivaratri marks the night when Lord Shiva performed the ‘Tandava’. It is also believed that on this day Lord Shiva was married to Parvati Ma. On this day, Shiva devotees observe fast and offer fruits, flowers and bel leaves to Shiva Linga.

The festival is celebrated in honor of Lord Shiva, the famous Indian God. It is a popular festival among the Shaiva cults all over India, performed with fervor and devotion from north to south and east to west.

Name of the festival

Mahashivaratri meaning the ‘Great Night of Shiva’  Maha – Shiva- Ratri is also known as Shivaratri. The ratri word in the title highlights its celebration in the night. The festival is mainly celebrated at night by fasting and being awake.

Shiva is one of the three famous gods of Hinduism known as trimurti. They are Brahma, Vishnu and Mahesh. Mahesh among the trinity and Shiva are the same; rather those are the epithets of the same god which give different shades of the meaning. Shiva among the trinity is considered as the destroyer of the world; on the other hand, rest two are creator and protector respectively. Shiva is also well known for his mythical third eye which generates fire as the consequence of Shiva’s anger.

Vedic Rudra assumed the proto form of Lord Shiva. Rudra the horrifying, off beat god of Vedic society took the form of God Shiva during the later period. In Purana literature Shiva’s nature is portrayed as innocent,  he is also depicted as angry at the same time. Lord Shiva has so many epithets such as Mahadeva (great god), Tryambaka (with three eyes), Shamkara (who makes everything auspicious), etc. He is the single god in Hinduism who is illustrated with his family; Parvati as wife, Kartikeya and Ganesha as sons. These deities are known as Shivaparivara along with his vehicle Nandi. Mountain Kailas is depicted as the abode of the Shiva and his Parivara. 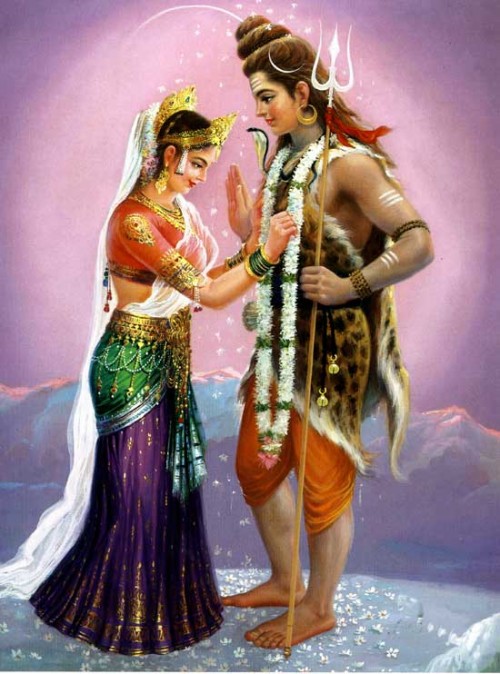 ip simple while maintaining the truth that God does not have any definite form.

Most prevalent icon of Shiva and virtually found in all Shiva temples, Shiva Linga is a rounded, elliptical, an-iconic image that is usually set on a circular base or peetham. According to some scholars, the Peetham represents Parashakti, the manifesting power of God.

Shiva Lingas are usually made of stone that may either be carved or naturally existing – svayambhu, such as shaped by a swift-flowing river. Shiva Lingas may also be made of metal, precious gems, crystal, wood, earth or transitory materials such as ice. Some scholars say that transitory Shiva Linga may be made of 12 different materials such as sand, rice, cooked food, river clay, cow dung, butter, rudraksha seeds, ashes, sandalwood, darbha grass, a flower garland or molasses.

When it is celebrated

The festival of Mahashivaratri is celebrated all over the country with great enthusiasm. It is usually celebrated every year on the 13th night / 14th day in the Second half of the month of Magha in the Hindu calendar. Magha month is the month of February and March according  to the Gregorian calendar.

(If the festival falls on the Sunday or Tuesday then it is considered as greatest.)

Why it is celebrated

As stated before the festival is in honor of Lord Shiva. The Puranic tradition gives the story as, ‘during the Samudra Manthana (churning of great ocean), poison halahala emerged from the ocean.  As the poison was capable of destroying the entire world, the gods and demons became scared and went to Shiva for help. To protect the world from its evil effects, Shiva drank the poison but held it in his throat instead of swallowing it. Due to this, his throat turned blue and he was given the epithet as Nilakantha (blue-throated one) by world. After this incident, his throat started burning then he placed Ganga on his head to cool his body.  Mahashivaratri is celebrated to commemorate this event when Shiva saved the world. On this day the objects which are cool by nature such as milk, curd, and water are offered to Lord Shiva.

How it is celebrated

This festival is of two types, Kamya (performing with desire) Naimittika (regular performance).  Anybody from any divisions of the society can perform this festival. Upavasa (fast), worship and jagarana (being awake at night) these three are the main components of the festivals. Following verses should be recited during worship,

One should wake up early in the morning. Taking purificatory bath and wearing Rudraksha he/she should visit Shiva temple. Shiva is worship with the Panchamruta abhisheka (bath with milk, curd, honey, sugar, and honey), bilva leaves. Sweets and thandai (a drink made with cannabis, almonds and milk) as offering are some of the important aspects of the festival. At some places, eatables which are white in colour are offered to Shiva. People visit the temples of Shiva and offer prayers. People also worship the Shivaparivara on this day.

In South India, Yamapuja is performed in the following way,

The Yampuja is also narrated in the Dharmasindhu on the page no 191.

Hymns such as Rudra Patha, in praise of Lord Shiva are sung with great fervor and devotion. People repeat the Panchakhsara Mantra (verse which has five letters) Om Namah Sivayaa (Om Namah Shivaya). It is believed that one who utters the name of Shiva on the day of Mahashivaratri with devotion is freed from all sins, he/she reaches the Shivaloka (abode of Shiiva) and lives happily there and it is also believed that he/she is liberated from the cycle of birth and death.

Mainly Shiva is worshipped in the form of Shivalinga. Importance of Shivalinga Worship is mentioned in Medinikosha. Dharmasindhu has given the gains of worshipping various Shivalingas, Such as

(Dharmasindhu 193. 1) Worship of Shivalinga made of Gem gives long life, and of pearl destroys diseases)

Legends related to this festival

The Puranas contain many stories and legends describing the importance of this festival. Some of the famous stories are,

Once a Brahmin went to a forest for hunting. There he climbed onto a tree due to fear of a chasing tiger. Under the tree there was a Shivalinga. The whole night, the tiger waited by the Shivalinga looking for the Brahmin. On the other hand, the Brahmin was just dropping the leaves of the tree for passing the time atop the tree. Instead of sitting hungry on the tree it would be better to offer oneself to the tiger, – thinking thus the Brahmin came down in the morning. It was the night of Mahashivaratri. Due to the fast and vigil in front of the Shivalinga, both were transformed into virtuous ones and became famous in Shiivaloka as Canda and Nikumbha.

Another story- a merchant was tied in a Shiva temple by his creditors as punishment for not paying a loan. There whole night he fasted. Then, in the morning creditors released him. Due to spending time in Shiva temple and unknowingly fasting the previous day of Mahashivaratri, he obtained the mercy of Shiva.

(Somanatha at Sourashtra, Mallikarjuna at Shrishaila, Mahakala at Ujjain, Omkar at Mamaleshwara, Vaidyanatha at Parali, Nageshwara near Dwaraka, Vishveshwara at Varanasi, Tryambaka near Nasik, Kedarnath in Himalaya Dhushnesha near Kailas; if one remembers these twelve Jyitirlingas day and night, all his sin perishes.)

Every year, the festival of Shivarathri is celebrated with devotion in all these places. People visit these temples enmasse. Mahashivaratri is totally a religious festival by nature which is celebrated in honor of Lord Shiva.