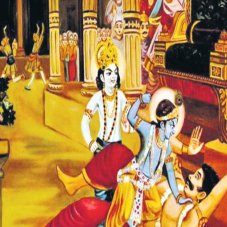 It is the second day of the five-day-long festival of  Deepavali/Diwali. The Hindu literature narrates that the asura (demon) Narakasura was killed on this day by Krishna, Satyabhama and Kali.

The day is celebrated by early morning religious rituals and festivities follow on.

Chhoti Diwali is about preparing yourself for the big Diwali day. Narak Chaturdashi or Choti Diwali is celebrated the next day to Dhanteras.
This year it is to be celebrated on November 3.
Significance of Naraka Chaturdashi
The festival of Naraka Chaturdashi is symbolic of the victory of good over evil. It is the day when evil Narkasura met his end at the hands of Krishna.
In southern India, Naraka Chaturdashi is observed as the main Deepawali festival; a reason why Diwali in southern India is celebrated a day before north India. People of north India celebrate the return of Lord Rama to his Kingdom of Ayodhaya while south Indians celebrate the beheading of Narkasura at the hands of Krishna. It is an opportunity for us to cleanse our thoughts and start afresh with a pious and happy mind.
At the core of the festival lies the Hindu philosophy of ‘Truth ever Triumphs’.

RITUALS
On this day, people wake up at sunrise and prepare for a scented oil bath, for which preparations are made the night before. The water-pots are cleaned and decorated with marigold flowers and mango leaves and the water is heated the next morning for use. Oil baths are hugely popular in Ayurveda, as they help in building immunity against accidental injuries or stress. It is also believed that those who take regular oil-baths possess a pleasant touch, becomes strong and remains youthful for longer. The house is lit up with oil lamps and the ladies of the house perform aarti of the men. New clothes are worn by the family members and sweets are offered to God. Special sweets and savouries are distributed to family and friends such as Laddus, Chaklis, Sakkaparas, Badamhalwa and Poha