Navratri: In the first half of the month of Asvij, Hindus observe a nine day ceremony of fast, rituals and celebrations to honor various forms of Shakti. This nine day ceremony is called Navaratri and it ends with Dasara, on the tenth day. Usually Navaratri and Dasara are celebrated together throughout the country, with great enthusiasm and energy.

The festival of Dasara is celebrated on the tenth day of the bright half of Asvij month, according to Hindu Lunar Calendar. The festival falls in the month of September or October according to Gregorian calendar.

Name of the festival – Navratri

The festival of Dasara is also known as Dashahara, Dussehra which originates from Sanskrit words ‘Dasha’ and ‘Hara’. ‘Dasha’ here means ‘Ravana who had ten heads’ and ‘Hara’ means ‘The one who is defeated’. Hence the word signifies Lord Rama’s victory over the ten headed demon, Ravana.

The festival of Dasara is also known as Vijayadashami. This title of the festival has two words ‘Vijaya’ and ‘Dashami’ meaning ‘Victory’ and ‘Tenth day’ respectively. The term thus literally stands for ‘Victory on the tenth day’.

Considering the meaning of various titles given to the festival, it can be concluded that Dasara is the ‘festival of celebration of the victory’. It marks the end of war and the destruction of evil. It is a festival of joy and happiness. 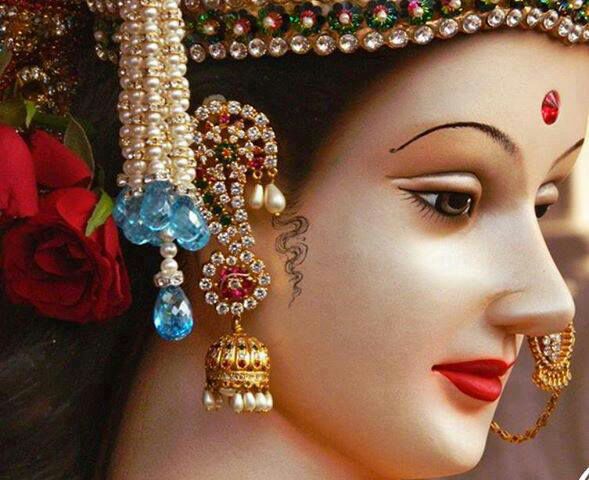 Legend Behind the Festival

The following historical and scriptural records vindicate the fact that Dasara is a ‘festival of celebration of victory’ – of good over evil.

During Agnyatawasa they were living in the kingdom of Virata. On suspicion, the Kauravas had stolen the cattle of Virata to trap the Pandavas. It is believed on this day the Pandavas appeared with their weapons and defeated the Kauravas.

Some interesting Facts About Navratri

On the day of Dasara, the Pandavas revealed their true identity after living for a year incognito. This marked their preparation for the victorious war of Kurukshetra.

It is said that Lord Rama had performed a ‘Chandi Sacrifice’ to invoke the Supreme Goddess Durga during Navaratri. Also It was only because of Maa Durga’s blessings that Rama could defeat Ravana.

It is simultaneously believed that after the victory, before proceeding to Ayodhya, Lord Rama worshipped a Shami tree.

This victory of Rama over Ravana is mentioned in all the scriptures involving Lord Rama such as Valmiki’s Ramayana, Kalidasa’s Raghuvansham and Tulsidas’s Ram Charit Manas.

Another Stories Of Navratri:

Following this Kautsa went to King Raghu. Raghu was an ancestor of Lord Rama and was revered for his generosity. But, just before Kautsa approached him for the wealth, King Raghu had performed the ‘Vishvajita sacrifice’ and donated all his money to the Brahmins.

So, King Raghu requested the gold coins from Indra, Indra called Kubera, the god of wealth, and asked him to shower gold coins on the Shami and Apta trees around king Raghu’s Kingdom.

King Raghu gave all the coins to Kautsa who took only the required 140 million coins. King Raghu distributed the remaining gold coins to his subjects. To mark this event, Hindus gift the leaves of Apta to each other as a symbol of gold on Dasara.

Why is Navratri celebrated?

All the legends associated with Dasara suggest that the festival is celebrated to conquer victory and eradicate the evils and ill practices from society.

The celebration of the festival might have started during the time of ancient kings. Smritis, which form part of our Scriptures, have clearly prohibited kings to initiate any kind of political conquest during the monsoon season.

The Smritis have also suggested that a king should perform many rituals during Dasara.

After performing all the rituals of worshipping arms and armor, horses and elephants, and the royal throne, kings are advised to plan and start for conquests over enemies on this day.

Hence during ancient era, Dasara or Vijayadashami was the day suggested for the beginning of any political adventure.

On the day of Dasara, all auspicious rituals take place. These are, Simollaghana, Shamipujana, and Aparajitapujana, Shatrapujana Saraswati Puja and Ravana dahana.

Among the rituals, Simollaghana and Shamipujana are interrelated to each other. Simollaghana is crossing the border of the village or empire.

On this day, people go towards the Northeast direction from their dwelling place. Then they stop near the tree of Apta or Shami and worship the tree. While worshipping, they recite the following verses,

The devotees bring back with them soil and leaves from the tree and gift one another out of love.

Near the tree of Apta or Shami, people also worship Aparajita by chanting the following verse,

Aparajita refers to the Supreme Goddess Durga who defeated Mahishasura, a dreaded buffalo demon. In some places people also worship goddesses Jaya and Vijaya along with Aparajita.

As Dasara is the festival of victory, people also worship arms and armor on this day and the ritual is known as Shatrapujana.

Weapons, agricultural implements, all kinds of tools, equipment, machinery and automobiles are decorated and worshipped on this day along with the worship of goddess Saraswati.

Saraswati puja is performed on the 9th day of Navaratri and continues till the day of Dasara. The Saraswati puja is mainly performed in all the learning centers such as school, colleges, traditional teaching places, book stores etc.

On Dasara or Vijayadashami, books are ceremoniously taken out for reading and writing after worshiping goddess Saraswati. Dasara is also an auspicious day for starting formal education. Many new classes and beginning of learning or Aksharabhyasa for children start on the day of Dasara.

In the northern part of India Ramalila is observed with great zeal and enthusiasm. Ramalila is a dramatic performance on the story of Rama and is performed during the nine days preceding Dasara.

On the tenth day of Dasara or Vijayadashami, Rama killed Ravana hence the dramatic performance of Ravanadahana, killing of Ravana by Rama, takes place publicly. On this day, a huge bonfire or replica of the devil Ravana is erected and burnt in many places.

All India celebrations Of Navratri

In Kashmir, Himachal Pradesh, Uttar Pradesh and Uttarakhand there is a tradition to plant barley seeds in clay pots on the first day of Navaratri.

On the day of Dasara, those sprouts are used as a symbol of luck. In Kulu, Dasara is celebrated at the famous temple of Raghunath. Rally of Raghunath on chariots is a memorable practice.

Dasara or Vijayadashami is also celebrated with great zest and zeal in different parts of South India. Worshipping of goddess Chamundeshwari, a form of Durga, starts from Navaratri onwards.

This celebration is known as Golu in Karnataka, Andhra Pradesh and Tamil Nadu. Golu festival continues till Dasara in which there is a tradition of exhibiting dolls.

In Karnataka, the city of Mysore celebrates with great enthusiasm the festival of Vijayadashami. All the rituals related to the victory are celebrated with great pleasure here.

Richly caparisoned elephants go on a procession and this is watched by many onlookers lining both sides of the streets.

The last three days of the Navaratri festival are celebrated as Saraswati Puja in Kerala. On the Vijayadashami day, Kerala celebrates Vidyarambha, initiation of formal education of children.

The child is guided to write for the first time, with the index finger, on rice spread in a plate. The ritual is generally performed by an elder of the family or by a reputed teacher.

In Maharashtra, the day is marked as auspicious to commence any important work. Hence people perform household ceremony and buy new things on Dasara.

They immerse Ghata (pot) in the water installed on the first day of Navaratri.

People worship the Apta tree while performing Simollaghana and exchange its leaves as the symbol of gold, wishing each other prosperity in life. The people of Western India also perform Shatrapujana and Saraswati Puja on this day.

In Bengal, Dasara is celebrated as the farewell to goddess Durga whose worship starts on the fifth day of Navaratri. They immerse idols of the goddess in a river or pond. It is referred to Durga Bisarjan in regional language. In Bihar, Assam and Orissa, goddess Kali, an appellation of Durga, is also worshipped as a symbol of Shakti. Immersion of Kali also takes place on the day of Dasara.