In: Festivals Of The Month, Newsworthy, World News
With: 0 Comments 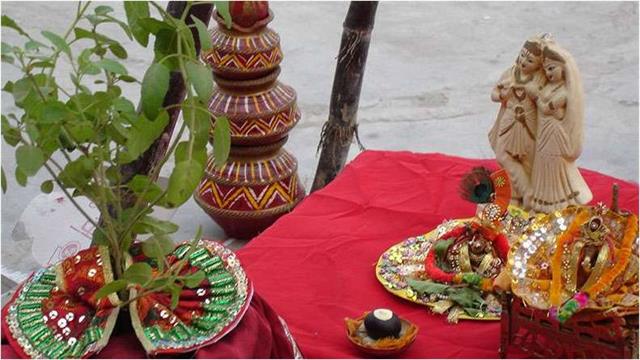 ‘Tulsi Vivah’ is the ceremonial marriage of the Tulsi plant to the Hindu god Vishnu in the Hindu calendar of kartik month of full moon (kartika poornima) of the month.

On 12th, Parana Time for Alternate Ekadashi = 06:48 to 09:01 On Parana Day Dwadashi would be over before Sunrise

Tulsi Vivah is usually observed in the month of November. As per Hindu mythology, Tulsi was actually a woman named Vrinda who was married to a demon king named Jalandhar. Vrinda worshiped Lord Vishnu and prayed for her husband to be invincible. No God was able to defeat Jalandhar because of Vrinda. However, Vishnu disguised himself as Jalandhar and violated Vrinda. Her purity was destroyed and Jalandhar was killed by Shiva.

When Vrinda came to know about the truth, she cursed Lord Vishnu and turned him into a black stone (Saaligram) and burnt herself on her husband’s funeral pyre. Lord Vishnu then transferred her soul into a Tulsi plant and as a blessing married Vrinda in the next birth as Saaligram.

Since then the tradition of Tulsi Vivah came into existence.