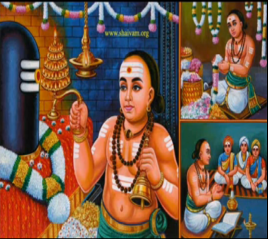 Gananatha Nayanar is a famous nayanar saint and after his death, he has become the head of the attendants of Lord Shiva and is still living in Kailasa by serving Lord Shiva and Mata Parvati Devi. His selfless service to the god and to the devotees of Lord Shiva had made him to reach the KAILASH.

He was born in a Brahmin family in Sirkazhi. He was an ardent devotee of Lord Shiva and a regular visitor of Brahmapureeswar Temple (Sattainathar Temple) and worships Lord Shiva, in the form of Thoniappar. He conducted pujas in the temple, and offered naivedyam (Food offering) to the Lord and also provided food to the devotees of Lord Shiva at his home.

He had given lectures on shaivism and invoked the bhakti spirit among the people. He was a great scholar in all the subjects was well versed in chanting vedas and shiva mantras. Many people were impressed by his services and contributed their portion of work with regard to plucking flowers from the flower garden and fetching the water from the well for pouring it to the shiva lingam etc. He took care of the shiva devotees in a proper manner, and apart from providing food to them, he also distributed clothes to the poor devotees and also educated their children in a proper manner.

Gananatha Nayanar was also a devotee of Sambandar, and considered him as his guru, and learned the shaivite philosophies from him.

Due to his sincere dedication on the god, and towards his great service to the people, after his death, he attained MOKSHA, and went to the divine abode of Lord Shiva, The Kailasa. In the Tamil month of Panguni, his birth day is celebrated as Guru Pooja day in all the Shiva temples.

He had shown love and affection to everyone without any caste discrimination. He was loved by the people, and treated him with great respect. He doesn’t hate anybody, and moved with the people in a soft manner. Due to his kind behaviour, lot of people were got attracted with him, and eagerly listened to his divine lectures on Lord Shiva. He eliminated the unnecessary thoughts, and filled up with only good thoughts in his mind. During his life, he had done lot of good karmic deeds by doing service to the god and to the people.

By reading his life history, let us try to cultivate the habit of helping others and praying to the god with utmost faith in our mind.

Let us chant the name of the great nayanar saint and be blessed.