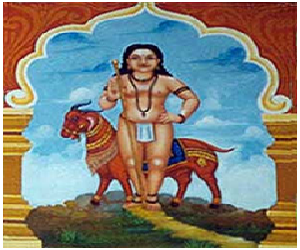 Prior to having peacock as his Vehicle, Goat is believed to be the First Vahanam of Lord Muruga. Lord Muruga was born from the third eye spark of Lord Shiva, in order to kill the powerful demon Surapadma. In order to prove his powers, Lord Muruga playfully fought with Lord Indra and other Devas and killed them, and after the request of the Deva Guru Sri Brihaspati, he restored the lives of Lord Indra and other Devas, and also shown his true form(Viswaroopa Darshanam) before them. All the Devas including Indra realized the supreme powers of Muruga, and prayed to him to kill Surapadma and his attendants. On hearing their cries, Lord Muruga fought with Surapamda and destroyed him along with his entire army.

Once, Narada conducted a yagna for the welfare of the universe. But while chanting the mantras, the Vedic priests who performs the yagna, chanted some of the mantras wrongly. And as a result, a big sized goat appeared from the Yagna fire, and it began to attack all of them.

All of them were very much frightened and took refuge before Muruga. The divine child consoled them, and when the goat tried to attack Lord Muruga, he stood before it calmly and watched it with the vision of grace. Due to the grace of Lord Muruga, the goat had become very calm, and immediately Lord Muruga sat down on its back, and made it as his holy Vehicle.

Lord Muruga is willing to shower his grace on all of his creations. But due to illusion, we are not able to realize his greatness, and we are also ignoring him. He is ready to take away the evil from us, and would give spiritual bliss, based on our sincere bhakti on him. We have to surrender ourselves at his holy feet, and must ask him to forgive our sins, and act as an obedient servant to him. At any point of time, he would not leave us alone, and he would send his divine attendant Lord Veerabahu, to guard us and Lord Veerabahu would follow us like our shadow, and he would come with us in all walks of our life.