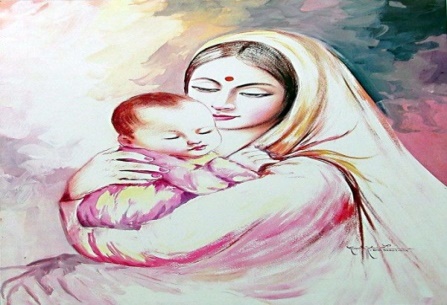 INTRODUCTION
Gopikamba (16th century) was a pious and a noble woman and the wife of the great scholar Sri Timmanacharya. The holy couples had three children: Gururaja, Venkatanatha, Venkatamba. Among the three, Sri Venkatanatha in his teenage, has become a great saint, and has given the title “SRI RAGHAVENDRA TIRTHA”. He has attained Jeeva Samadhi at Mantralyam in the year 1671, and is still blessing and doing miracles in the life of his devotees from his Samadhi.
Gopikamba was a great devotee of Srirama, and also a dutiful wife to her husband Timmanacharya. She would get up early in the morning, and pluck flowers for the puja, and perform the puja to the god, and offer food to her husband and children, and then only she would have her food. Even when there is poverty at their home, she didn’t disrespected her husband, but remained calm and maintained patience, and believed that everything is happening by the will of the god. She also fed food to the neighbours children, and shown her motherly affection on each and every child. With regard to her noble character, she can be compared with Parvati Mata.
She contains great wisdom and courage. Though she has not studied well, by listening to the religious discourses in the temples, she got good knowledge in the Hindu divine texts. She never scolded her children and always showed kindness and gentleness towards them. She was such a kind and a respectable woman. Due to her good karmic deeds, she was blessed to have a great saint to be born as her son. After her death, it is believed that she has attained SALVATION.
Let us worship the noble woman and be blessed.
“OM MATA GOPIKAMBA NAMAHA”
“JAI SRI RAM”
“OM SRI RAGHAVENDRAYA NAMAHA”
WRITTEN BY
R.HARISHANKAR