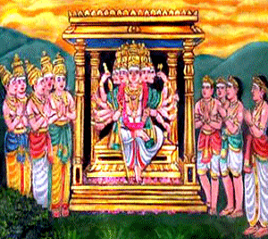 Nava Veeras are the nine great soldiers and the brave divine attendants of Lord Muruga. They were born from Nava Shakthis, who were born out of the powers of Mata Parvati. They are also considered as an incarnation of Mata Parvati.

By reciting the names, and studying the details of the Nava Veeras of Lord Muruga, we will get boldness, wisdom and courage and can get great mental and spiritual energy. Since they contain great divine powers, we can worship by chanting their names and our prayers will be fulfilled through their grace. They also have got the powers to pass on our prayers to Lord Muruga and to find a remedial solution for us.

Let us worship the divine army of Lord Muruga and be blessed.