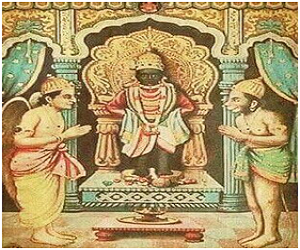 Thiruvadi means the one who serves as a humble servant to the great almighty. Periya Thiruvadi refers to Lord Garuda, since he is occupying the position of Vahana to Lord Vishnu, and he lives in the Vaikunta along with Lord Vishnu and Mata Lakshmi Devi. Siriya or Chinna Thiruvadi refers to Lord Hanuman, a sincere Sri Rama Devotee. Hanuman served as a Vahana to Rama and Lakshmana during the Treta Yuga, and since he served as a Vahana to the Vishnu Avatar, Lord Rama, he is called as Chinna Thiruvadi.

We can also call Sri Bhakta Prahalada and Sri Dhruva as Chinna Thiruvadi, since both of them are the dedicated devotees of Lord Vishnu. According to god, he would treat all of his devotees as alike. He didn’t find any partiality between them. All the humble servants of the god, are attached with the god, and through that, god always dwells in their souls. Without the thoughts of the god, they cannot live even for a single moment in their life. That’s why Lord Hanuman and Lord Garuda contain great powers, good wisdom, physical and mental strength, courage and they are having all the good qualities with them.

Due to his sincere devotion on Lord Rama, Hanuman can also be called as Periya Thiruvadi, since he has been chanting the “RAM NAAM”, for several millions of years. And after knowing about his sincere bhakti on Rama, we are also interested to develop great bhakti on Lord Rama.

By chanting the Ram Naam for several lakhs of times, we would get good health, wealth and all kinds of prosperity in our life. At this present day tough life, we can get great mental relaxation only by way of thinking about the almighty and his divine avatars and AMSHAS like Garuda, Hanuman, Bhakta Prahalada and Dhruva. By keeping their thoughts in our mind, somehow we can push our day to day life, without much difficulty.