In: Avatars, Shiva
With: 0 Comments 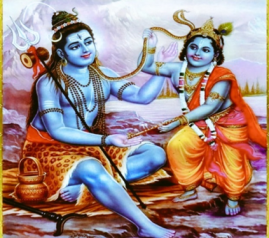 As per ancient legend, once a pious sage whose name was Visvanara, lived on the banks of the holy Naramada River in an Ashram along with his consort. Since the noble couple didn’t have a child for a long time, both of them went to Kashi, and offered their humble prayers before Lord Shiva. Lord Shiva was pleased with the devotion of the holy couple, and hence, he blessed them and also decided to take birth as their son.
In course of time, Visvanara’s wife Shuchismati had become pregnant and gave birth to a beautiful child.

During the time of naming ceremony of the child, all the gods were assembled at the ashram of Visvanara, and blessed the divine child. Lord Brahma had given a nice name to the child as Grihapati.   During his young age, Upanayanam was performed to Grihapati, he learnt the Vedas and Shastras with the guidance of his father, and become a great scholar.

Once the wandering sage Narada visited the family, and he advised Grihapati to travel to Kasi in order to perform penance on Lord Shiva. In Kasi, Grihapati had constructed a beautiful ashram for him, and peacefully performed meditation on Lord Shiva. Lord Indra once visited Grihapati at his Ashram and he was eager to grant a boon to the divine child. But Grihapati didn’t demand him anything, and due to that, Lord Indra become furious, and tried to hurt him through his powerful Vajra weapon. On seeing it, Grihapati prayed to Lord Shiva and sought for his protection.
On hearing the cries of Grihapati, Lord Siva appeared before him, and made Lord Indra to flee from that place. Then he blessed Grihapati, and also made him as a powerful demi god. The Shivalinga which Grihapati had worshipped in Kashi, is known as Agneeswara Lingam.

After hearing about the boon given by Lord Shiva to his son, the Rishi couple were very happy, went to Kashi, worshipped Lord Shiva, and performed meditation near the banks of Ganges, and attained salvation.