Hanuman is a Shiva Avatar

In: Avatars, Gods, Shiva
With: 0 Comments 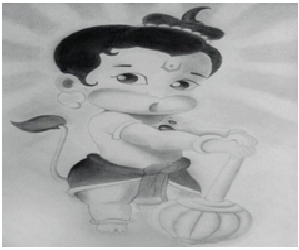 Lord Hanuman is the best avatar of Lord Shiva, and he is an obedient servant of Lord Rama. Though he remained as a humble servant of Lord Rama, Lord Rama didn’t treat him as his slave, but treated him as his dear friend, and considered him as his affectionate companion. Though Hanuman is a Shiva Avatar, he didn’t get pride on himself, and he is still living as a Chiranjeevi at a cave in the Himalayas, by chanting the Rama Mantra.

Hanuman was born in the Treta Yuga as an incarnation of Lord Vayu. His parents were Mata Anjana Devi and King Kesari, and it is believed that he was born and brought up at Kishkinta. His childhood plays are very wonderful and it closely resembles to that of the mischievous childhood plays done by Lord Krishna. In his childhood itself, Lord Hanuman tried to catch the Sun god, Surya Bhagavan, by thinking him as a big fruit. On seeing his act, Lord Indra had hit him with his weapon Vajrayudha. Due to that, Hanuman felt unconscious and he was carried by his father Lord Vayu, and due to his anger, Vayu went inside a cave and hide himself and his son Hanuman, and stopped circulating the air. Due to that, the people in the earth, and the demi gods in the heaven began to suffer a lot, and as a result all the divine gods appeared before Vayu and Hanuman, and granted lot of boons to Hanuman.

On seeing this, Lord Vayu was very happy and he again started circulating the air in the entire universe. Lord Hanuman has become very powerful, and as a result during his childhood, unknowingly he has done lot of mischievous acts like, disturbing the penance of the sages, spoiling their Yagnas, and playfully laughed at them. For some time, the sages beared the insults of Hanuman, but after that, they became very angry and cursed him to forget the extraordinary powers that he possessed due to the boons given by the divine gods.

After that during the time of his voyage to Lanka, it was Sri Jambavan who made him to remember his superior powers, and encouraged him to visit to Lanka, and gave his blessings.

Lord Hanuman is a humble servant of Lord Rama, and he considers him as his slave. By taking him as an example, we must have to worship him and his master Lord Rama sincerely throughout our life.