In: Devotees, Shiva
With: 0 Comments 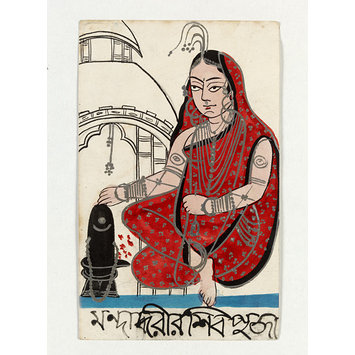 INTRODUCTION
Mandodari was the  consort of Lanka king Ravana, and she was very beautiful, pious, and a chaste woman. It is believed that in her previous birth, she was a celestial dancer, and due to a curse, she was born as Mandodari.
Mandodari was the daughter of Mayasura, the King of the demons and she was born during the Treta Yuga. Mandodari had two sons: Meghanada and Akshayakumara. Eventhough, she was the wife of Ravana, she was a noble woman who repeatedly argued with her husband Ravana to relieve Sita and to send her to her native place. But Ravana didn’t listens to her advice, and done the cruel act of keeping Mata Sita under his custody till his death.
Mandodari was an ardent devotee of Lord Shiva, and used to perform puja to the Shiva Lingam at the palace of Ravana along with him. It is believed that after her death, she has become one of the divine attendants of Mata Parvati at Mount Kailash.
Let us worship Mata Mandodari and be blessed.
“OM SRI MANDODARI DEVIYE NAMAHA”
“JAI SRI RAM”
WRITTEN BY
R.HARISHANKAR