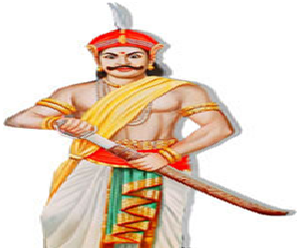 Ma Meenakshi was the daughter of Malayathwaja Pandiyan and Kanchanamala. At her teenage, she defeated all the kings in the earth and also defeated all the demi gods in the divine worlds. Finally she reached Kailasa, the abode of Lord Shiva, and after she met him, she showed her shyness before Lord Shiva, and Lord Shiva blessed her, and promised that he would marry her in Madurai after a short period of time. Likewise, Lord Shiva married Mata Meenakshi at Madurai, and at that time all the saintly people in the earth and the demi gods in the heaven were attended the divine marriage and they were very much pleased.

After the completion of marriage, both of them began to rule the kingdom of Madurai in a nice manner. During the reign of Ma Meenakshi all the people in Madurai lived a happy and a blessed life, and lived without any miseries and sorrows in their lives. Rain was showered in all the seasons, and people lived a long life, without suffering from any diseases in their life.