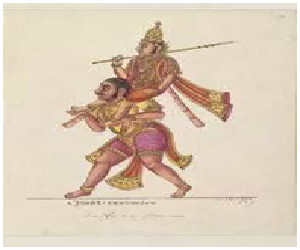 For most of the divine personalities, their usual vehicles would be either animals or birds like Garuda, Nandi, Peacock and Mouse. But rarely humans also serve as vehicle to the divine personalities, like Nirudi Devata and Lord Daksha Bhagavan. Both of them are having a human being as their divine vehicle. The humans would use to carry them with their shoulders, wherever they decide to go.

Once when Lord Brahma had performed a Yagna, a man was emerged from the sacrificial fire. Brahma asked that man to serve as a divine vehicle to his son Lord Daksha. The man also wilfully accepted the orders of Lord Brahma, and began to sincerely serve as a divine vehicle to Lord Daksha. Daksha was the father of Ma Dakshayani, an aspect of Ma Shakti Devi.

Nirudi Devata is classified as a demonic Deva, and sometimes he is mentioned as a form of Ma Kali Devi. Nirudi Deva is also a famous deity similar to Indra, Kubera, Varuna and Vayu. Nirudi is the Guardian of the Southwest direction, and he contains great powers, and his vehicle is a man, and Lance is his weapon. He has installed a lingam in the Tiruvannamali Girivalam path. He is also worshipped similar to Lord Vastu Deva by the real estate people and by the land owners.

Divine vehicles are very lucky since they got the opportunity to serve their divine masters. Through the divine touch of their masters, their mind would always be clear and pure. The powers of Lord Garuda and Lord Nandikeswarar are unlimited. They are having sufficient powers to lift even the entire universe with their hands.

In general, the people who pull the hand rickshaws are also act as a vehicle to the humans. Just for the purpose of filling up their belly, they are lifting the people through their hand carts, and at present, only in a few cities, hand rickshaw pullers are there. Only the fortunate ones would be serving as the vehicles to the almighty, and the lesser fortunate people would be serving as vehicles to the mankind.