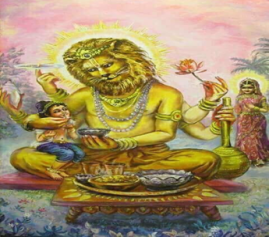 There is an ancient and a wonderful temple dedicated for Prahalada Anugraha Murthy also called as Prahlada Varada Narasimha Temple, and it is situated in the lower Ahobilam of Kurnool District, Andhra Pradesh. In this temple, Lord Narasimha is seen in the form of blessing posture, where he blesses Prahalada by showering his full grace on him. This temple is famous for ancient paintings and marvellous sculptures. Ancient Alvar Saints have gloried Lord Narasimha in this temple, and they have sung lot of songs in praise of him.

Apart from the main shrine, shrines for Ma Lakshmi, Lord Venkateswara, Andal and Alvars can also be found in this temple. Beautiful Utsava idols of Prahlada Varada, Pavana Narasimha and Jwala Narasimha can be seen along with his consorts Ma Sreedevi and Bhoodevi on his both sides. This is a big temple, and we can see lot of Mandapams which is situated in the outside of the temple, and these Mandapams would look very attractive fitted with decorative lights during the times of festival occasions. The annual Brahmotsavam festival is celebrated in this temple in a grand manner during the month of February.