In: Puranas, Vishnu Avatar
With: 0 Comments 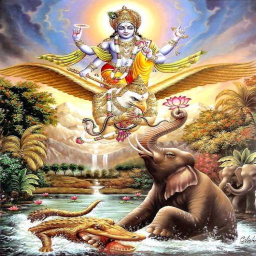 INTRODUCTION
The details about Sri Gajendra, the holy elephant were mentioned in Bhagavata Purana. This story tells us that how the great Lord Sri Vishnu Bhagavan is coming down to the earth from Vaikunta to safeguard his sincere devotees during their difficult times. According to Bhagavatam, Lord Vishnu come down to earth and protected Gajendra, the elephant, and saved it from the clutches of the Crocodile, and through the blessings of the Lord, Gajendra had attained MOKSHA. Then, Lord Vishnu also gave Moksha to the crocodile also. This story was told by Sri Suka to king Parikshit.
It is believed that the incident was happened in Mangalagiri, Andhra Pradesh. There is an ancient temple at Kapisthalam, Tamil Nadu and it is known as Sri Gajendra Varadha Temple, and it was built in order to mark the wonderful incident, and to show the greatness of Lord Vishnu.
Similar to this incident, whenever we suffers from any problem, we must immediately chant the mantra “OM NAMO NARAYANAYA NAMAHA”, and immediately the god would reply to our urgent call and make his presence in front of us in some other form, and remove our problems. The only thing is that we must have pure bhakti on him.
Let us worship the merciful god Sri Vishnu Bhagavan and be blessed.
“OM SRI GAJENDRARE NAMAHA”
“OM NAMO NARAYANAYA NAMAHA”
“OM SRI LAKSHIMI DEVIYE NAMAHA”
WRITTEN BY
R.HARISHANKAR