In: Gods, Vishnu Avatar
With: 0 Comments 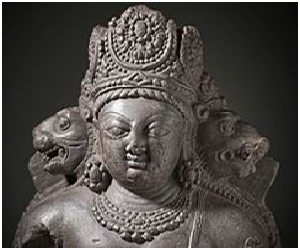 Vaikuntha Chaturmurti is a powerful aspect of Lord Vishnu, who contains four heads, and he is worshipped by the Hindus in Kashmir in the temples of Lord Vishnu. This form is considered to be the supreme manifestation of Lord Vishnu. He contains a human head, a lion head, a boar head and a demonic head, which represents his staunch devotee Prahalada. He contains four hands, and appears with a smiling face, and he holds the weapons like sangu, chakra, gada and lotus. Generally, Vaikuntha Chaturmurti usually appears in standing posture, but sometimes he can be seen seated with his divine vehicle Lord Garuda.

The details about the four headed Vishnu, was mentioned in Mahabharata, and also in some ancient holy texts of Hinduism. The animal head represents Lord Narasimha and Lord Varaha. The deity was given much importance in Kashmir during the 12th century AD by the then kings of Kashmir. This form also contains various other names such as   Vaikuntha, Vaikunthanatha , and Vasudeva Narayana.

The name Chaturmurti is also found in the Vishnu sahasranama stotra, a divine stotra written in praise of Lord Vishnu, and it contains 1000 names of Lord Vishnu.

This form of Lord Vishnu was worshipped by the kings who ruled Gujarat during 15th century AD.

Lord Vishnu so far took nine avatars, and he has also taken 24 forms. All these avatars and forms preach good things to us, and they are considered as very pious and pure. By worshipping Lord Vaikuntha Chaturmurti, we would attain spiritual powers, and we would prosper in our lives.