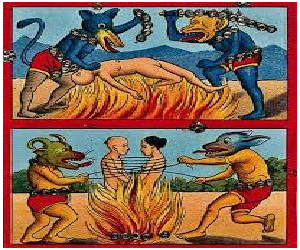 Yama Kingaras are also known as the divine attendants of Lord Yama, who reside in the Yama Loka, and serves sincerely and obediently to their boss Lord Yama. They contain the features of their master Lord Yama Dharma Maharaja, and they are discharging their duties in an excellent manner. They would never commit any mistakes in taking the souls, and at the appropriate time, they would take away the right souls of the persons, and would make them as dead bodies.

They contain great powers, and all of them are the worshippers of their Lord Yama and Lord Shiva. In this earth, no one can escape from death, and at some day or other day, definitely we would have to die. During the time of our death, the Yama Kingaras would not give time for us to relax, but would take away our lives, within a fraction of a second.

As per our Hindu Puranas, it is mentioned, that those who commit lot of sins in their lives, would be send to the hell by the Yama Kingaras, and there they would be punished severely by them. This is not applicable in case of noble people like pontiffs serving in the Mutts like Mantralayam, Kanchi, Shakatapuram and Srigeri etc. Since these pious people concentrate their entire attention on the almighty almost throughout their lives, they are not subject to punishment in the Yama Loka. Either they would take birth as holy people in their next birth or otherwise they would attain salvation.

But in case of ordinary people like us, we would keep worrying about our death, and also about our life after death. Since regularly we are committing lot of known or unknown, small or big mistakes, we are getting afraid of our death. In general, all of the people in the world would pray to the almighty to get a peaceful death. But it is not in our hands, since according to our Karmas definitely we would have to pass many hardships during the time of our death.

Taking birth as a human is very rare, and we are all blessed to be born in this earth as humans, and hence we should utilise this birth properly, by doing good activities like providing food and other necessities to the poor, visiting temples, worshipping the deities, singing songs and glorifying the almighty etc. Daily while worshipping other deities, saints and saviours, we should also worship Lord Yama Dharmaraja, in order to get a peaceful death, during the end of our life.