Daksha Prajapati is a great valour and a brave person. He cursed Lord Chandra to loose his powers, since he has shown more attention on one of his daughters Rohini Star than the other 26 daughters. He is considered as one of the great, honest and able Brahmin king. He has got the powers equivalent to that of Brahma and occupies equivalent status among other prajapatis like Agni, Indra, Vishvakarma, Bharata, Kapila.

Daksha was one of the Prajapati, son of Brahma, and among his foremost creations. The name Daksha means “skilled one”. Daksha had two wives: Prasoothi and Panchajani (Virini). Sati (also known as ‘‘Uma’’) was his youngest daughter; born from Virini (the daughter of the Prajapati Manu), she was the pet child of Daksha and he always carried her with him. Sati (meaning truth) is also called Dakshayani as she followed Daksha’s path; this is derived from the Sanskrit words daksha and ayana (walk or path).

Sati, the youngest daughter of Daksha, was deeply in love with the god Shiva and wished to become his wife. Her worship and devotion of Shiva strengthened her immense desire to become his wife. However, Daksha did not like his daughter’s yearning for Shiva, mainly because he was a Prajapati and the son of the god Brahma; his daughter Sati was a royal princess. They were wealthy nobility and their imperial royal lifestyle was entirely different from that of Shiva. As an emperor, Daksha wanted to increase his influence and power by making marriage alliances with powerful empires and influential sages and gods.

Shiva on the other hand led a very modest life. He lived among the downtrodden, wore a tiger skin, smeared ashes on his body, had thick locks of matted hair, and begged with a skull as bowl. His abode was Mount Kailash in the Himalayas. He embraced all kinds of living beings and did not make any distinction between good souls and bad souls. The Bhutaganas, his followers, consisted of all kinds of ghosts, demons, ghouls and goblins. He wandered though garden and graveyard alike.
As a consequence, Daksha had aversion towards Shiva being his daughter’s companion. However unlike Daksha, Sati loved Shiva as she had the revelation that Shiva was the Supreme God.[3][7]

The Kurma Purana discusses the dialogues between the sage Dadhichi and Daksha. After the sacrifice and hymns where offered to the twelve Aditya gods; Dadhichi noticed that there was no sacrificial portion (Havvis) allotted to Shiva and his wife, and no vedic hymns were used in the yajna addressing Shiva which were part of Vedic hymns. He warned Daksha that he should not alter the Holy Vedas for personal reasons; the priests and sages supported this. Daksha replied to Dadhichi that he would not do so and insulted Shiva. Dadhichi left the yajna because of this argument.

Sati came to know about the grand yajna organized by her father and asked Shiva to attend the yajna. Shiva refused her request, saying that it was inappropriate to attend a function without being invited. He reminded her that she was now his wife more than Daksha’s daughter and, after marriage, is a member of Shiva’s family rather than Daksha’s. The feeling of her bond to her parents overpowered the social etiquette she had to follow. She even had a notion that there was no need to have received an invitation in order to attend as she was Daksha’s favourite daughter and no formality existed between them. She constantly pleaded and urged Shiva to let her attend the ceremony, and became adamant in her demands without listening to the reasons Shiva provided for not attending the function. He allowed Sati to go to her parents’ home, along with his followers including Nandi, and attend the ceremony, but refused to accompany with her.

Upon arriving, Sati tried to meet her parents and sisters; Daksha was arrogant and avoided interacting with Sati. He repeatedly snubbed her in front of all the dignitaries but Sati maintained her composure. Because of Sati’s persistence in trying to meet him, Daksha reacted vehemently, insulting her in front of all the other guests at the ceremony to which she had not been invited. He called Shiva an atheist and cremation ground dweller. As planned, he took advantage of the situation and continued shouting repugnant words against Shiva. Sati felt deep remorse for not listening to her beloved husband. Daksha’s insulted towards her, and especially her husband Shiva, in front of all the guests was growing each moment she stood there. The shameless insult and humiliation of her and her beloved, eventually became too much to bear.

She cursed Daksha for acting so atrociously toward her and Shiva, and reminded him that his haughty behavior had blinded his intellect. She cursed him and warned that the wrath of Shiva would destroy him and his empire. Unable to bear further humiliation, Sati committed suicide by jumping into the sacrificial fire. The onlookers tried to save her but it was too late. They were only able to retrieve the half burnt body of Sati. Daksha’s pride in being a Prajapati and his prejudice against his son-in-law created a mass hatred within himself, which resulted in the death of his daughter.

The Nandi and the accompanying Bhootaganas left the yajna place after the incident. Nandi cursed the participants and Bhrigu reacted by cursing the Bhootaganas back.

Destruction of the yajna by Shiva

After knowing about the incident, Lord Shiva created Lord Veerabadra and Goddess Veeramahakali ,and they both of them went into the Yagna, and destroyed the yagna and also chopped the head of Daksha. However after hearing the prayers of Daksha’s wife, Lord Shiva has regained his life by placing a Goat’s head on to his head ,and then he allowed to continue the yagna. Daksha prayed to Lord Shiva and Lord Shiva has forgiven him. 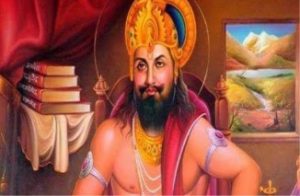