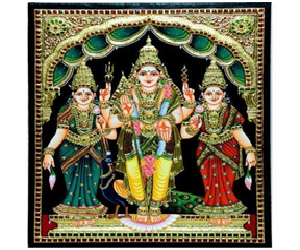 Devasena is the mother goddess and the consort of Lord Muruga.  She is also known as Devayanai. Devasena is believed to be the daughter of Lord Indra, the chief of the demi gods. She got married with Lord Muruga in the Tirupparankunram, which is later constructed as Murugan Temple.

According to ancient texts, Devasena was believed to be the daughter of Lord Vishnu in her previous birth. She performed penance on Lord Muruga, and due to that Lord Indra adopts her as his daughter and marries her to Lord Muruga. Muruga also helped Indra in defeating the demons in several battles. In most of the South-Indian temples, Lord Muruga is depicted with both of his consorts, Valli and Devasena.