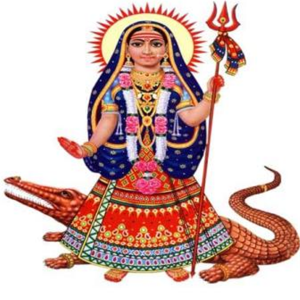 INTRODUCTION
Khodiyar Mata is a Hindu goddess born in Gujarat during 7th century AD. She was the daughter of the great shiva devotee Sri Mamad Ji Charan.
Mamad Ji Charan was the friend to the king of Gujarat. Due to his friendship with the king, he was insulted by the ministers, who were jealous of him and was not permitted to enter inside the palace by stating the reason that he is not having any children.
Due to that, he performed severe penance on Lord Shiva. Through the blessings of Lord Shiva he was blessed with children. And his daughter was Khodiyar Maa. In her previous birth her abode was Nagalok, and she was the princess of the Nagalok. She was skilled in all kinds of arts and also a great warrior, and also got good knowledge in divine scriptures.
By seeing her super natural powers, people believed her to be a powerful goddess and they began to worship her. She has several temples in north india. Crocodile was her vehicle and her various names are Khodal Mata, Trishuladhari and Maavdi Devi.
Devi Temple in Bhavnagar district, Gujarat is the famous temple dedicated to her and was constructed before several hundred years. People visit this place to seek the blessings of the divine Nagadevi Amman. She fulfils the wishes of the devotees immediately. During the nagapanchami festival, devotees will come from all parts of india to visit the divine shrine of Mata Khodiyar Devi. She is also the Kuladeivam for many north indian people.
Her other temples are situated in Gujarat, Rajasthan and Mumbai.
1. Khodiyar Mata Temple at Khodaldham, Gujarat.
2. Khodiyar Mata Temple at Matel near Wankaner.
3. Khodiyar Mataji temple near Bhavnagar.
4. Shree Khodiyar Mandir near Dhari, Gujarat.
IMPORTANCE
She is considered as an incarnation of ADIPARASAKTHI, and was very powerful in treating various poisonous diseases, brain fever and several other dreaded diseases. She also removes the fear from our mind and gives mental satisfaction. She is also worshipped as NAGATHAMMAN and NAGADEVIAMMAN in the southern parts of india. Her divine grace will shower on us, and our all the problems will come to an end, if we visit her main shrine at Bhavnagar, Gujarat, or if it is not possible, we can pray to her at our home itself by reciting her various names and mantras meant for her. By worshipping her, our all sorts of bad habits, sins committed in previous births will be removed, and bad, suicidal and unwanted thoughts will be permanently erased from our mind, and we will get spiritual enlightenment.
Many devotees had shared their experiences about the importance of Mata. In internet, we can see the video and get it shared with others. One movie was also taken by showing the greatness of Maa Khodiyar and was successfully run for several months.
It is advisable for those who suffer from Kala Sarpa Dosham and Naga Dosham to visit this temple, and conduct various pujas, homams and abhishekhams to get rid from their doshams. Many people were got relieved from Naga Dosham by visiting the Devi Shrine. Let us try to visit the holy shrine at least once in our life time to get the glimpse of the great divine mother at Bhavnagar,Gujarat and to get her divine blessings.

Let us worship her with sincere bhakti in our mind, and be blessed.