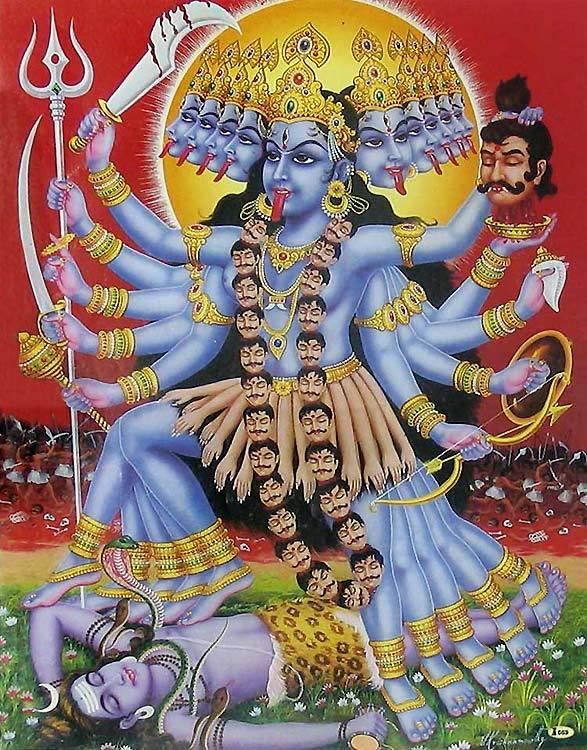 INTRODUCTION
Once, the entire universe was suffered from the clutches of the powerful demons. The demons got various boons from the gods by doing penance and tried to rule the earth and heaven. Among the fierce demons, Raktabija was the cruel one, and he used to disturb the sages from doing fire sacrifices and spoil their penances by causing lot of problems to them. He got great boons from Lord Brahma, and began to attack Lord Indra.
Due to that, the demi gods and the sages began to worship Mata Shakti and praised her glories, in order to protect them from the demon Raktabija.
Mata Shakti took the form of Kali Devi, and the battle between Raktabija and Kali Devi took place. And finally Kali Devi destroyed the demon, and drank his blood and began to dance with a loud laughter.
Mata Kali didn’t stop dancing, and due to that, the divine gods approached Lord Shiva in order to pacify her. Shiva went in front of Kali and asked her to stop the dance, in order to safeguard the universe. But she didn’t listen to the words of Lord Shiva, and began to dance and dance and finally Lord Shiva lay down at her feet, and finally Kali Devi realized her mistake, and she asked apology to Shiva and become very calm.
Let us worship the divine couples and be blessed.
“OM SRI SHIVAYA NAMAHA”
“OM MATA KALI DEVIYE NAMAHA”
WRITTEN BY
R.HARISHANKAR