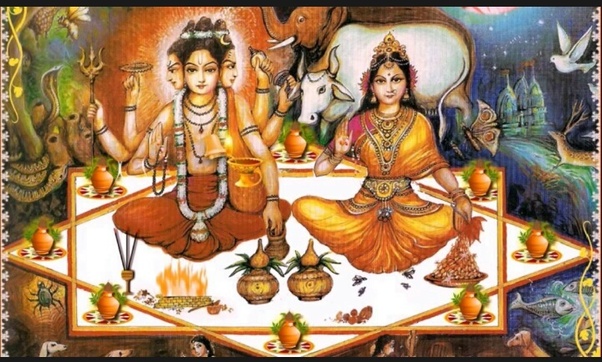 Mata Anagha Devi is considered as an aspect of Lord Dattatreya. She has formed from the powers of Lord Dattatreya, and she looks very beautiful, and contains shining face, and holds the divine nectar in her hands, and she shows motherly affection on us. She is a form of Mata Shakti Devi, and she is a very powerful goddess, who would protect us from our enemies, and come with us throughout our life.

She was formed in order to make her devotees as sinless. During this present Kali Yuga, since lot of people are doing bad karmic deeds, Lord Dattatreya had created and named her as Anagha, which means sinless.  She is the divine energy of Lord Dattatreya, and those who sincerely worship her would be relieved from their sorrows, and would get peacefulness in their mind, and their life would prosper. According to ancient texts, she is the reliever of sins, miseries and sorrows, and considered as the goddess of happiness. As per ancient Puranas, in order to become sinless, people must remove their ego, and they should develop good habits, and must remove the bad thoughts in their mind, and they should not pay too much attention on worldly pleasures, since it will create lot of troubles and turmoil for them. It is believed that those who are pure and holy, Mata Anagha would permanently dwell in their hearts, and would give great divine pleasure to them.

Let us worship Mata Anagha Devi and Lord Dattatreya and be blessed.