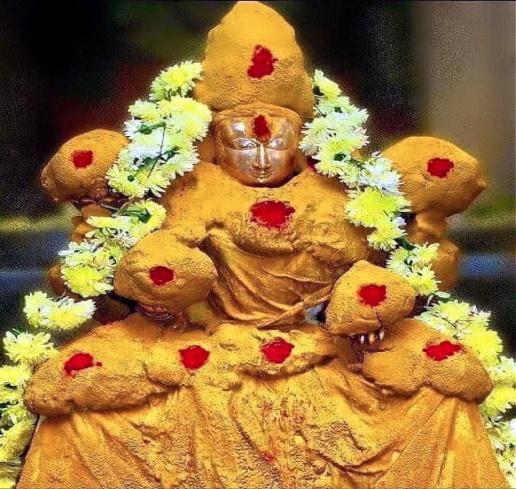 INTRODUCTION
Padmavathi also known as Alamelu manga is the consort of Lord Sri Venkateswara and an avatar of Mata Lakshmi Devi. The famous Temple of Padmavathi is   situated at Tiruchanur, near Tirupati. According to legend, those who prefer to travel to Tirumala, must first visit and worship the shrine of Mata Padmavathi at Tiruchanur, and to offer their prayers and then only they can proceed to Tirumala Venkateswara Temple.
Padmavathi is the mother goddess who showers her grace on her sincere devotees and gives immense benefits to them and bless them with all sorts of prosperities in their life. Several Azhwar saints were praised her beauty and glory and composed and sung several songs on her. She is the favourite consort of Sri Venkateswara and she protects her devotees from all sorts of problems in their life. According to legend, it is believed that still now, every night, Lord Venkateswara of Tirumala, is visiting Tiruchanur and staying with his consort Mata Padmavathi for some time, and then return backs to Tirumala.
Sri Annamacharya, who was an ardent devotee of Padmavathi, sung several songs in praise of her. And several times, he got her divine appearance and received blessings from her.
Let us worship the great goddess and be blessed.
“OM SRI PADAMAVATHI THAYARE NAMAHA”
“OM NAMO VENKATESWARAYA NAMAHA”
WRITTEN BY
R.HARISHANKAR