In: Devi, Ramayana
With: 0 Comments 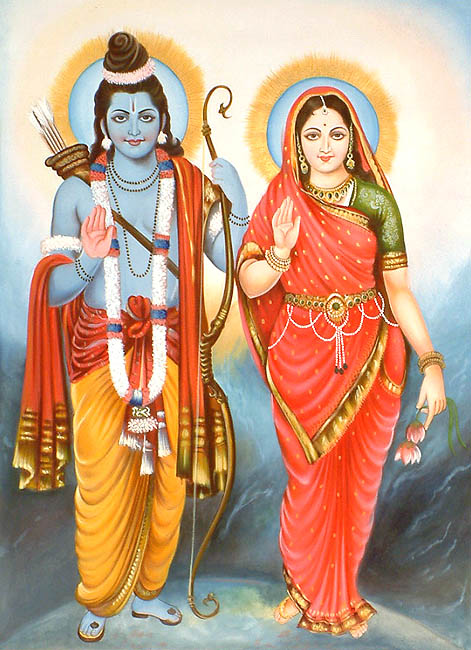 INTRODUCTION
Sita is the main character and is the most pious and holy woman as per Ramayana. She is considered as the incarnation of the earth goddess, Bhumi Devi and was adopted by King Janaka of Videha and his wife, Queen Sunaina.
She has a younger sister, Urmila, and the female cousins Mandavi and Shrutakirti. Sita is well-known for her dedication, wisdom, knowledge, kindness, self-sacrifice, courage and purity.
Sita chooses Rama, the prince of Ayodhya as her husband in a swayamvara, where Rama proves his valour and married her. After the swayamvara, she went along with her husband to his kingdom, but later she accompanied her husband Rama, along with her brother-in-law Lakshmana, in his exile. While in exile, in the Dandaka forest she was kidnapped by Ravana, the Demon king of Lanka. She is imprisoned in Lanka until she was rescued by Rama. After the war, Sita entered into the fire in order to prove her chastity and purity before she is accepted by Rama.
After proving her purity, Rama and Sita returned to Ayodhya, where they are crowned as king and queen. After a few months, Sita becomes pregnant, and due to the gossip made by a person of his region, Rama sends Sita away on exile. Then she takes shelter in sage Valmiki’s ashram. After few years, she handed over her sons to Lord Rama, and went inside the earth and stayed with her mother, the earth god, since she doesn’t want to further suffer any-more in this world.
Let us worship the holy mother and be blessed.
“OM MATA SITA DEVIYE NAMAHA”
“JAI SRI RAM”
WRITTEN BY
R.HARISHANKAR