In: Devi, Devta, Goddesses
With: 0 Comments 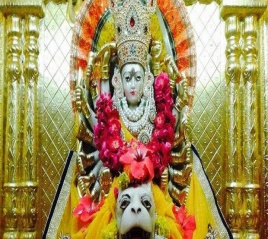 Modheshwari Devi is an incarnation of Mata Parvati. She is the main deity of the Modh community of Gujarat.

Once there lived a fierce demon Karnat who disturbed the Brahmins and all other caste of people while doing their daily prayers and also disturbed the demi gods in the heaven. Due to that, all the demi gods and the people in the earth approached Mata Parvati. On hearing about their sufferings, she got angry and created a Shakti devi who is known as Modheshwarimata. Mata Modheshwari has got eighteen arms, containing weapons in each hand, and appears in fierce form.  She destroyed the demon Karnat and saved the demi gods in the heaven, and the people in the earth.

She is the worshipped by the modh sect of people in Gujarat and they worship Modeshwari mata as their kula devata.

Ma Modeshwari is mostly worshipped by the people of North India. She is a holy mother who protected the universe from the demon, and killed him. She will never tolerate the sufferings of the living beings and immediately will take action to remove their sufferings. She also relieved the physical and mental diseases of her devotees, and took them to the spiritual path and made them to get peacefulness and happiness and to attain prosperity in their life. Let us try to visit at least one of her temples in our life time and be blessed.