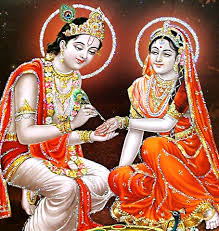 INTRODUCTION
Satyabama is the consort of Lord Krishna. She is believed to be an incarnation of Bhu Devi, the Goddess of Earth. She helped Lord Krishna in killing the demon king Narakasura. She also brought the divine wish fulfilling tree Kalpavriksha from the heaven with the help of Lord Krishna.
Satyabama was the daughter of Yadava King Satrajit. And due to some issues he disliked Lord Krishna. But after some time, he realized the greatness of Lord Krishna, and willingly offered his daughter to Krishna. Satyabama was a close friend of Mata Draupadi.
After the death of Krishna, Satyabama has left her physical body, and reached the divine abode of Vaikunta. Satyabama was a calm woman and maintained patience throughout her life, since she was the avatar of Bhu Devi. She acted as a dutiful wife of Lord Krishna, and sincerely served him throughout her life.
Let us worship the divine mother Mata Satyabama and be blessed.
“OM SRI SATYABAMA ANNAIYE NAMAHA”
“JAI KRISHNA”
WRITTEN BY
R.HARISHANKAR